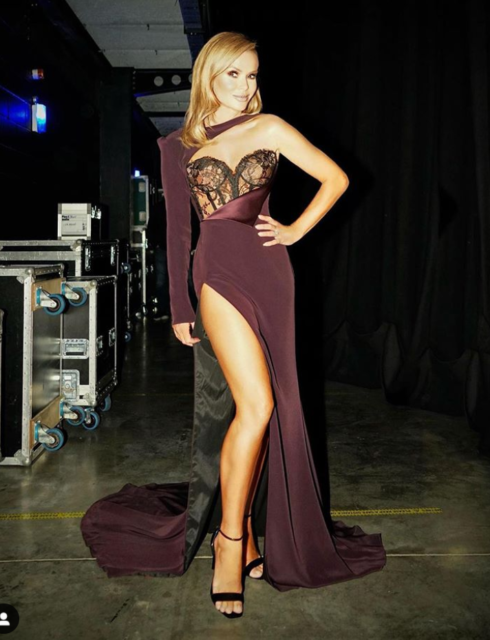 Hundreds complained to broadcasting watchdog Ofcom over her low-cut ensemble on the ITV talent show last week and tonight Amanda revealed plenty of leg instead.

Amanda Holden, 49, stunned on the semi finals of Britain’s Got Talent tonight

Amanda, 49, looked absolutely stunning in the sheer lace corset that flowed into a floor-length gown with a split up to her thigh.

She teased the look on Instagram moments before the semi-final aired, writing alongside a sexy snap: “The LAST of the #BGT SEMI-FINALS is starting now!!”

Her fans cheered online and many went into meltdown over her show-stopping outfit.

One said: “There’s nothing to Amanda’s dress again!” Amanda stunned in the sheer lace corset and floor-length gown

And another wrote: “Has part of Amanda’s dress fallen off?”

As one more typed on Twitter: “Love that Amanda Holden has put two fingers up to Ofcom tonight by wearing an even less revealing dress than last week”

And another commented: “Amanda is a bit revealing again tonight”

Is Amanda gonna put the rest of her dress on in the ad break?

Has part of Amanda's dress fallen off?

Didn't they have time to finish Amanda's dress? #BGT

The judge isn’t phased by the hundreds of groans to broadcasting watchdog Ofcom over her low-cut ensemble on the ITV talent show last week. In the previous episode of BGT, Amanda’s sexy outfit sent fans into a tizzy as they questioned whether the star had suffered a wardrobe malfunction.

Amanda laughed at the complaints and said: “I can see what people think, it had a like an underwire, you know when you have an underwire bikini or bra, the end of it it’s like an upside down U isn’t it. The end of it dug in.

“I was more insulted that people thought I had either huge saucepan nipples or nipples over my cleavage.

“I am seriously thinking my girls (boobs) need separate representation to me, because they are known on their own. They don’t need me, they’re going to go off and do Piers Morgan’s Life Stories on their own next year! Fans questioned whether they could see her nipples on the show

The judge is set to give a stunning performance of Sweeney Todd’s Not While I’m Around from her new album Songs From My Heart, which has already sold out on Amazon following its release on Friday.

Filming was pre-recorded due to the ongoing coronavirus pandemic, and Amanda is once again showing of her enviable figure.

Taking to her Instagram page, the TV favourite offered fans a glimpse at what to expect on the show. Amanda is wearing yet another plunging dress for BGT

In the photo, the blonde beauty is staring dreamily into the distance, her hair styled into soft curls.

Amanda is sitting on the stage and wearing a plunging dress with diamante detailing.

She captioned the post: “Can’t wait to perform on @bgt on Saturday night #SongsFromMyHeart”.

Why has Rufus Hound been axed from Dancing on Ice?

Love Island Australia full line-up: Who’s in the cast of the Aussie version being...