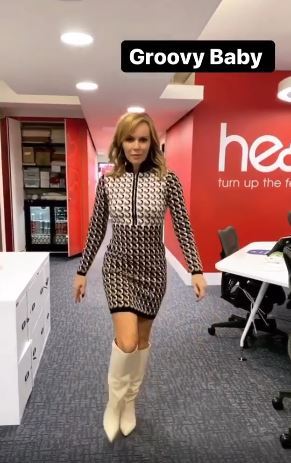 AMANDA Holden strutted straight back into the Sixties in thigh-high white boots and a printed dress as she channeled Austin Powers vibes.

The Heart Radio presenter was filming sashaying through the office wearing her zip up, figure hugging gown with an eye-catching brown, cream and black print.

The BGT judge – known for her controversial outfits on the ITV show – tagged the boots of the moment from Zara as she went tights-free.

When adding the video to her Instagram Stories, Amanda, 49, added the Austin Powers theme tune and the caption “Groovy baby” – the character’s signature catchphrase.

She later posed for a snap in the eye-catching garment while sitting on an office desk.

The mum of two was conveniently seated near a poster for her new album, Songs From My Heart, after performing one of the tracks live on BGT at the weekend. Amanda, 49, is known for her daring fashion choices on BGT She belted out her version of Barbara Streisand track, Not While I’m Around She covered up in a white gown as she gave an amazing rendition of her track, Not While I’m Around.

Amanda released her first album on Friday, which is already number one in the charts, and sang a track from the record for viewers in the semi-finals.

Many viewers were surprised when she delivered a pitch-perfect rendition of Barbara Streisand’s Not While I’m Around and admitted they hadn’t realised the actress could sing so well.

Hundreds of fans rallied around her on Twitter calling her a “queen” and “amazing” for her moving performance, but others wondered if she’d had a bit of help from auto-tune. Another said: “I wasn’t ready for this voice coming from Amanda. Is this for real or Disney version of auto tune.”

Another gushes: “How do we vote for Amanda to win?”

Amanda appeared dressed entirely in white while she performed after sparking complaints over her BGT dress last week.

SHE added the caption: “Groovy baby,:”

Did you miss our previous article…
https://www.hellofaread.com/britains-got-talent/alesha-dixon-celebrates-her-daughter-azuras-7th-birthday-with-trolls-themed-virtual-birthday-party/

Tom Fletcher risks upsetting I’m A Celebrity’s Giovanna by breaking his promise to not...

Two weeks ago Tories placed a bet at 100 to 1 that Penny Mordaunt...

Love Island’s Yewande Biala hits out at Lucie Donlan again saying ‘she got my...

Identity of 20 convicted terrorists, murderers and neo-Nazis able to come to UK under...