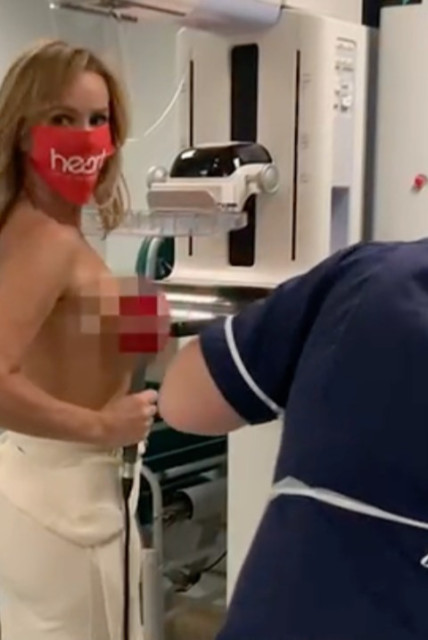 AMANDA Holden went topless and filmed her mammogram to share with fans after her boobs got attention for “silly reasons”.

The 49-year-old star underwent the check-up during her Heart FM breakfast show, urging listeners to also undergo the test – which checks for early signs of breast cancer.

In the video, the Britain’s Got Talent judge explains: “This morning I am at the hospital and I am going for my annual mammogram check-up; I always feel really nervous before I go in, I think it’s a really human thing to feel.

Showing off the machine, Amanda admitted that it looks “intimidating” – and that she understood stripping off in front of a nurse can be “nerve-wracking”.

She added: “In the end, it’s for your own safety and your own good, so just do it. Do it for your family and do it for yourself.” She documented the entire process The nurse then shared that women over 50 are invited for an NHS mammogram every three years before talking Amanda through the process – which Amanda relayed back to listeners.

The mother-of-two detailed: “My boob is now on a sort of black metal plate. It does feel tight but it doesn’t actually feel too uncomfortable.”

When the first set of pictures had been taken, she added: “That was really quick and really painless considering it could potentially save my life.” The star urged fans to get checked out

The machine was then turned on its side for two more images to be taken of Amanda’s breasts, and when the entire thing was finished she once again urged fans to get checked out.

She said: “I’ve just had it done. Everyone’s boobs are different, so for me it didn’t feel too paunful.

“It definitely felt very tight and a bit uncomfortable but I think for the seconds that it lasted it was definitely worth doing. She said that her boobs usually get attention for ‘silly reasons’

“So if you’ve never done it before, I promise you it’s over really quickly.”

Posting the video to her Instagram page, Amanda added: “My boobs always seem to be in the headlines for silly reasons so I hope that changes today as I document my own mammogram with @thisisheart to highlight that 1 in 8 of us women will be diagnosed with breast cancer during our lifetime.”

This is a reference to the Ofcom complaints that Amanda has sparked over the years for her risqué outfits on family show Britain’s Got Talent.

This year’s series was no different, with the star triggering hundreds of official calls to the TV regulator from furious fans – who accused the star of “revealing her nipples” in one sexy dress, and wearing another that looked like “lingerie”.

Dancing on Ice’s Colin Jackson says there are gay Premier League stars – but...

Jack Fincham quits Ex On The Beach to focus on boxing after MTV bosses...