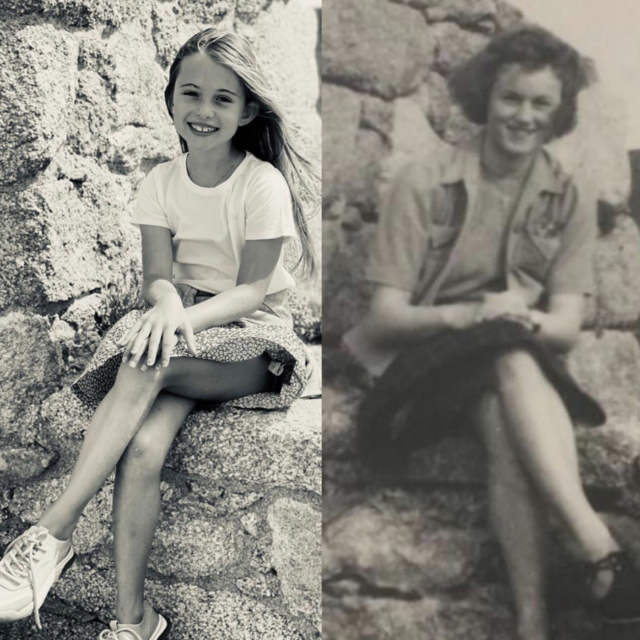 AMANDA Holden wowed her fans with a picture of her daughter Hollie, 8, recreating her nan’s photo 77 years on.

The star shared a snap of her daughter Hollie, eight, sitting in the same spot as her grandmother did back in 1943.

Hollie sat with her legs crossed and smiling, with the two sharing a strong resemblance.

Amanda captioned the sweet photo: “77 years ago my wonderful #Grandparents honeymooned on these beautiful isles… this is #HRH in the exact same spot all these years later !”

One fan commented: “Love that you have these photos – such strong genes too xx”

Another typed: “Beauty runs in your family

Amanda, 49, looked stunning in a recent photo from their holiday as she posed on the beach with the blue sea in the background. Amanda has been wowing fans with her photos from her holiday Amanda showed off her enviable legs in blue swimwear Amanda visited Sciliy where her grandparents stayed on their honeymoon Sharing the photo with her 1.5million Instagram followers, Amanda captioned the shot: “The sea is a bone chiller but we still swam. #Fishandchips supper – can’t beat a holiday in #greatbritain (when the sun shines

Amanda has just returned from a sun-filled break in St Tropez with daughters Lexi, 14, Hollie, eight and husband Chris Hughes.

The radio host and her family met up with Good Morning Britain presenter Piers Morgan while they were all in Saint Tropez, enjoying a boozy lunch with each other’s families.

During the lunch a group of young children arrived and recognised Amanda from Britain’s Got Talent. Amanda has recently returned from a holiday in St.Tropez

She later revealed the kids didn’t know who Piers was at all and had asked him to take a photo of them all.

Amanda captioned the post: “Thrilled to be known & asked for a photo from these lovely children from the #Netherlands and the #photographer @piersmorgan ( no clue who he is @bgt

Piers’ oldest son Spencer couldn’t resist joining in with the mocking, sharing the same photo to his Instagram Story and laughing: “Haha nightmare.

“Take the photo, son – they haven’t got a clue who you are.”

Despite the snub, and being left on crutches after tearing a tendon in his leg, Piers was in high spirits as he enjoyed the sun-soaked meal with Amanda.

The group danced as they listened to live music and could be heard laughing and chatting while making the most of each other’s company in footage shared across their social media channels.

Amanda is just one of Piers’ celebrity friends he has met up with while on holiday, with the star also having lunch with Joan Collins last week.

Boy, 7, will learn 102 songs between now and Remembrance Day to raise money...