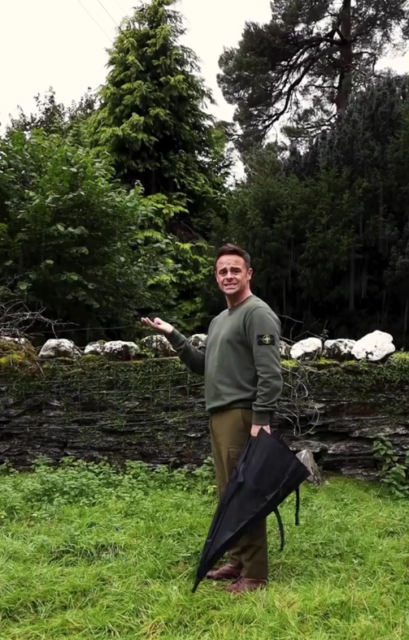 ANT and Dec took cover from Storm Alex under a huge brolly as they filmed at the I’m A Celebrity castle in Wales.

Ant, 44, and his partner in crime Dec, 45, took to their official Instagram page to share a video of them walking through the grounds of Gwrych Castle where the show’s 20th series will take place.

Ant pulled a distressed face as he stepped out into the rain wearing khaki trousers and a jumper, as Dec followed him and flashed a cheeky smile.

The Geordie duo captioned the clip: “Might want to take your brolly out today, it’s raining Ants & Decs out there”

And one I’m A Celeb fan commented: “Love the added squelchy feet noises”

Another said: “Welcome to Wales!” Dec shielded from Storm Alex under a large umbrella

The popular ITV show will be set at the 200-year-old property after the coronavirus torpedoed plans for it to take place in its usual digs in the Australian jungle.

It looks like the co-hosts are getting used to their new surroundings as they arrived at the 19th-century country castle on Tuesday.

They dressed up as explorers as they joked they were on a hunt to find the I’m A Celebrity castle.

They posed in front of a sign pointing towards the Welsh castle and captioned the pic: “Quick trip to Wales in search of the #imaceleb castle. If only there was a sign… However some fans are worried the current pandemic may jeopardise the show, with one fan saying: “Really hope covid and welsh restrictions doesn’t spoil it”

The 25-acre site, near the town of Abergele, has come at a hefty price as it has cost them more than £1million to hire for the duration of filming.

Earlier this month HOAR revealed that millions have been spent to make sure that the celebrities are ok to stay in the castle for the duration of the show. The castle has come at a hefty price of ITV bosses They have installed electrics, hundreds of yards of pipes for running water and even repaired the crumbling towers.

Builders have erected temporary coverings, using extra-strong plastic, over what will become the main camp for contestants.

There is also an unsheltered section of the haunted castle, where a campfire will be allowed. A show source said: “This isn’t a holiday camp for the stars, but without a roof, everyone would have been utterly miserable for three weeks, which would not make great telly.

“It will still be hard work but slightly warmer than if it snows where they are sleeping.

Additionally, a giant studio has been constructed from where hosts Ant and Dec will present the Covid- revamped show. The dynamic duo have their very own studio to host from

Security is in place as the castle backs on to a golf course and walking paths.

ITV bosses are absolutely thrilled with the new location.

They previously told us: “Producers are chuffed with the new location — they’re excited for a change in scenery this year.

“Obviously upping sticks and moving to a completely new location was a tough decision, but they feel confident it’s the right one.

“The Bushtucker trial crew, who work tirelessly all year round, have been working overtime to come up with some terrifying new trials and challenges.

“It’s a brilliant move for viewers as celebs will have no idea what to expect. It’s going to be compelling viewing.”

The source added: “It’s been a horrendous year for the whole country and the lads want to do their bit to get viewers smiling.”

Coronation Street spoilers: Abi Franklin enraged as police charge someone for the attack on...

How much does the Prime Minister earn?

Caitlyn Jenner snubbed by daughters Kylie and Kendall AGAIN as they fail to send...