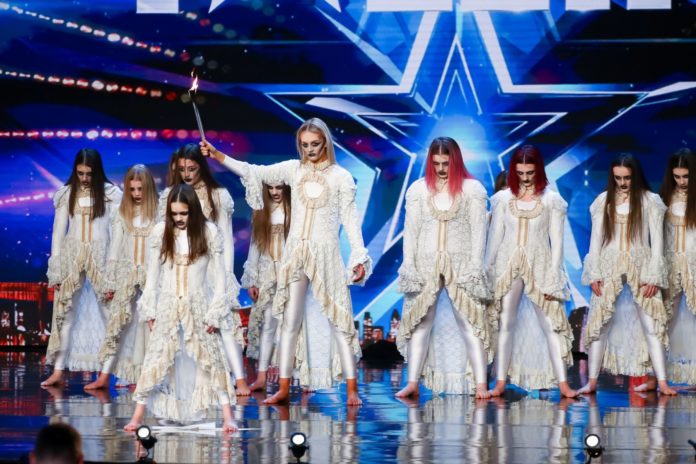 THE Britain’s Got Talent judges were left terrified by a creepy dance act called The Coven on Saturday’s show.

The group put on a very sinister performance and came together as a gang of zombies to try and wow the judges with their audition.

During the terrifying performance, Simon Cowell, 60, looked absolutely terrified as the group showcased their strange and eerie dance moves.

Fellow judge Amanda Holden, 49, was pictured mouthing “wow” as she witnessed the spine-chilling performance along with fellow judges Alesha Dixon, 41,  and David Walliams, 48.

The dancers donned white gowns and had fake blood splatters across their faces – which were also painted with scary make-up.

The group made their presence felt straightaway as they marched on stage holding flame torches as the crowd and judges watched on, eager to see what they would do next.

What the he’ll the coven freaked me out.. what the actual F?! The fact they stayed in character too! #bgt #BGT #BritainsGotTalent @BGT

The performance looked like something straight out of a horror movie and one of the dancers even made a beeline for Amanda.

Fans absolutely loved it, as they took to Twitter to heap praise on the dance troupe.

One fan said: “#TheCoven: I wanted something spooky and I got something even better. Loved it.”

Another fan was worried if her kids would be able to sleep after watching the performance, as she tweeted: “Now My kids are discussing if they were scared after watching #TheCoven no sleeping tonight.” Amanda Holden face after The Covens performance said it all I’m A Celebrity fans stunned as Beverley Callard and Victoria Derbyshire are eliminated in...