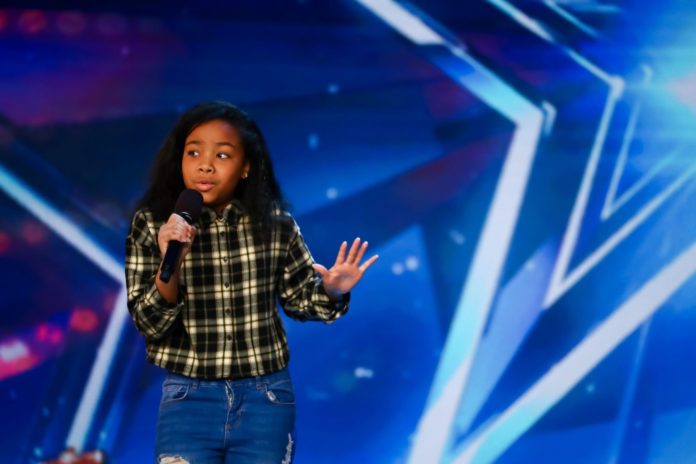 BRITAIN’S Got Talent has sparked a “fix” row as fans discover Simon Cowell’s golden buzzer act is already a star in a West End musical.

Fayth Ifil, 12, is headed straight to the semi-finals after impressing judges with her performance of Tina Turner’s Rolling on a River.

Fayth Ifil is a star in the West End

She won Simon over after revealing her confidence had been knocked because of “negative energy at school”.

But fans said they felt “conned” after finding out the youngster played a young version of the superstar singer in TINA – The Tina Turner Musical.

She also starred as Tamika in School of Rock when she was just ten years old, but her stage career wasn’t mentioned on the show.

One fan said: “So a girl who plays Tina Turner in west end comes and sings a Tina Turner song and gets a golden buzzer. Yeah she was good but seems a bit unfair to me #BGT.” She was stunned to get Simon’s Golden Buzzer

Another said: “So in all the chat about bullying, the girl who got the golden buzzer forgot to mention appearing in the west end? Must have slipped her mind.”

Someone else added: “BGT shy girl gets on stage to sing! Next 5 minutes you read she’d played child Tina Turner in the West End! I feel so conned! Please, Take the gold buzzer back now!”

A fan added: “2nd golden buzzer? What a fix this shower of shit so called talent show is #BGT.”

But others praised her performance, adding: “Fayth – 12 years old confidence and a voice like that she’s got a good future ahead of her.” She performed a Tina Turner song

“Cried tears of pride and joy at Fayth‘s audition… 12 years old and singing a song like Proud Mary like she’s Tina Turner’s love child. What an absolute superstar. #BGT,” said another.

Fayth performed in the West End a couple of times each week in the opening song.

She returned in the final number with the adult Tina for a show-stopping performance.

She told the Swindon Advertiser: “I really enjoy performing.

“It’s really fun seeing the audience’s faces reacting to the different parts of the show. It makes me feel really proud of the other cast members. Care homes were ‘thrown to the wolves’ during coronavirus outbreak, MPs blast

Shamed Tory MP Chris Pincher who was accused of ‘drunken gropes’ is kicked off...