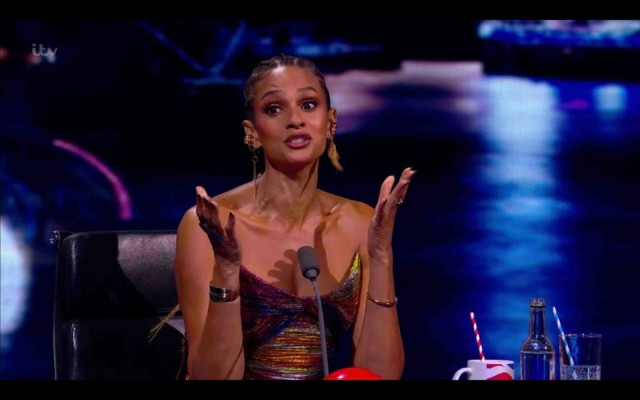 Diversity’s performance on Saturday night – which featured Ashley Banjo lying on the floor with a white police officer kneeling on him – has become the second most-complained about TV moment of the decade.

Alesha Dixon has stood up for her fellow judge

The dance involved talking points of the Black Lives Matter movement, as well as including imagery of George Floyd’s death, leading to 10,267 Ofcom complaints.

Alesha has now stuck up for fellow judge Ashley – who has stood in as a judge on BGT as Simon Cowell recovers from his back injury.

The Diversity frontman shared an image of himself alongside boxer Anthony Joshua and Formula 1 racer Lewis Hamilton.

Underneath the pictures, it read: “Dear Joshua and Banjo and other Black public figures. We the Great British Public will only support you if you entertain us and do not say anything about racism.” Ashley said he was sent this image on Instagram

Along with support from fellow celebs like Amanda Holden, Alesha replied: “They can kiss my black a**”.

Diversity’s performance is the second most complained about TV moment in a decade, behind Roxanne Pallett’s Celebrity Big Brother ‘punchgate’ drama with former Corrie star Ryan Thomas with 25,327 complaints, and behind Kim Woodburn’s interview on Loose Women with 7,912 complaints.

Ashley revealed earlier this week that he received a barrage of abuse over the performance.

But the show’s stand-in judge thanked critics for proving that it was a necessary performance. Ashley was arrested on stage

Taking to Twitter, he wrote: “So much to say… But I’ll Just let the performance talk. Thousands of messages of Love and support – Thank you.

“For the thousands of messages of hate and ignorance – Thank you. You highlight exactly what needs to change. Sending nothing but love to you all.”

Some BGT viewers said the “powerful” performance had moved them to tears while others insisted a “political statement” had no place on the talent show.

Ashley’s brother Jordan fought back tears yesterday over the “horrible” complaints, speaking on his Kiss Radio show he said it was “genuinely sad”. Ant and Dec said the performance was “powerful”

Jordan, 27, said: “Of course you get some critiques but normally it’s focused on the dance.

“But this one was different, it was really important, it was special to us.

“But we also got bombarded with messages and articles of horrible stuff about us, about our families, about how even now Diversity not diverse enough because there’s only five white people in it.” The dance has sparked over 10,000 complaints

Getting emotional, he added added: “I can’t speak for anyone else it’s sad, it’s sad, genuinely.”

Meanwhile, Perri hit back at one critic telling them to “get in the bin”.

50 ways to boost your income as wages fall and cost of living hell...