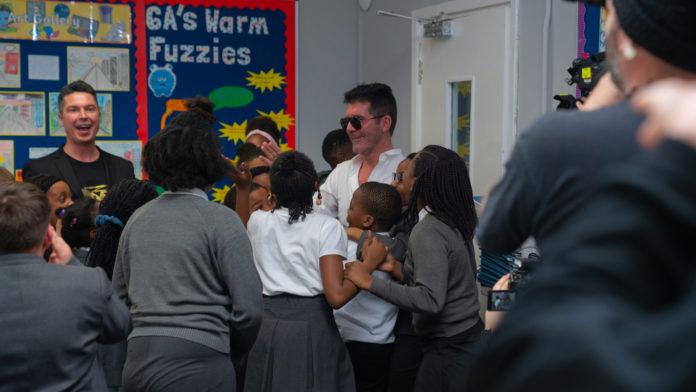 BRITAIN’S Got Talent judge Simon Cowell will be mobbed by school children on tonight’s show as he makes a surprise classroom visit.

The music mogul goes back to school in invite standout choir Class Dynamix to perform on the show.

They are a group of young children campaigning against bullying and they capture the hearts of all the judges with their catchy upbeat song to get across their important message.

Walking into the school classroom in Leeds the children run up to him to give him a hug and one boy asks him to take off his sunglasses to prove it’s really him.

The group’s music tutor and anti-bullying campaigner Danny exclusively tells HOAR Online that the surprise visit was a “dream come true” for the kids.

“Meeting Simon was so surreal!” he said.”I actually met him briefly first in the headmaster’s office and I have to say he carries this energy that I have never felt off anyone before.” “He’s got such presence about him, really magnetic, it was amazing. That was the moment it hit home what we were doing!

“I was awestruck, star struck, everything! Then I was in the classroom when he walked in to meet the kids for the first time and there was so much emotion.

“It was a dream come true for them because he represents that celebrity, star power that many people aspire to in many ways.

“I’ve taught the kids about the possibilities available to them if they use their imagination and trust themselves, so to see them realise one of their dreams was just awesome. It was incredible.” The choir captures the heart of the judges

Tonight the auditions show returns with magician Kevin Quantum who has a brush with death when his terrifying fire stunt goes wrong.

The contestant attempts to walk through a giant harmonic pendulum of fiery cannonballs with a bag over his head so he can’t see where the weights are flying. BGT fans are set to be left on the edge of their seats as they’re treated to another death defying stunt – quite literally.

Judges David Walliams, Simon Cowell, Alesha Dixon and Amanda Holden, are left stunned by wacky scientist Kevin – who had stand-by doctors panicking as he approached the swinging ball of fire.

Gearing up for the trick he says to the audience: “I need complete faith in science to make this work.”

The trick, which sees him blindfolded, normally goes without a hitch. The cannon balls were set alight and started to swing

As the balls are released hosts Ant and Dec, who are watching from the sidelines, ask: “Is that right? It doesn’t look right.”

Viewers will have to wait and see what happens next but it’s not the first time Kevin has performed the trick. The Queen offers a glimpse inside Buckingham Palace with her gold-leaf piano and chairs...