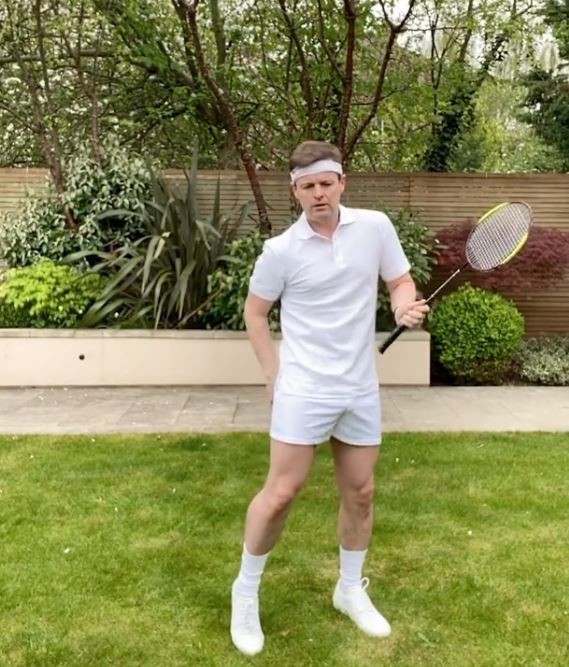 DECLAN Donnelly slipped into a pair of tiny white shorts to play Ant McPartlin at badminton in a hilarious new video.

The pair, who are separated by coronavirus lockdown, played a virtual game in their respective gardens.

Dec went all out, donning a headband, a white tee and tight shorts as he mimicked tennis ace Rafael Nadal while Ant dressed in black.

As they rallied against mystery players, Ant reminded Dec that he no longer lived on the same street, but was now six miles away.

It left both of them confused and ended with each letting out a little shriek and running off screen.

They captioned the upload on their joint Instagram account: “We wondered why the neighbours complained about the racquet The pair, who are being separated in coronavirus lockdown, played a virtual game in their respective gardens

One amused fan wrote: “You too are so funny

Another said: “Love you both!”

As a third posted: “This is brilliant!!

About time you moved to Ant’s new neighborhood, don’t you think, Dec??

Earlier this week the pair filmed a hilarious workout video.

Dec, 44, was seen challenging his best mate Ant, also 44, to a virtual workout in the funny footage after branding him a “lazy brute” for lying on the sofa. Telling him to “forget Joe Wicks”, Dec promised Ant he would “give him a good beasting” before challenging him to a press-up workout.

But with a clever trick of the camera, Dec then managed to perform the moves with one hand, one finger and even went on to clap between each one.

As Ant began to struggle after just a few regular press-ups, which he was doing on his lounge floor, he gasped: “Huh? What? How are you doing…?!”

He then collapsed on the carpet before storming off. Dec then did one-handed and even one-fingered press ups Twisting the camera around to show that he was actually doing his press-ups while standing against a bathroom wall, Dec said: “Are you with me? How to apply for Bridge of Lies on BBC One