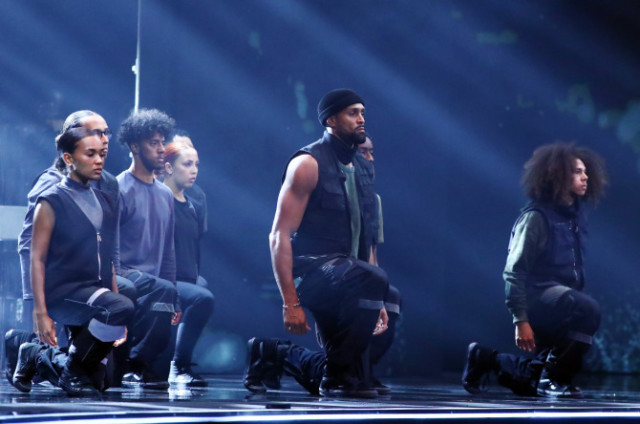 ASHLEY Banjo said the “hate” he got from Britain’s Got Talent viewers has only convinced him to ramp up his Black Lives Matter campaign.

Diversity’s dance routine – which saw a police officer kneeling on Ashley – received 24,500 complaints, making it the most complained about show this year.

In a new video addressing the uproar on Instagram, Ashley says that he will “never forget” the hate and abuse he got after the performance but also thanked people for their support.

Sharing the defiant video with his 935,000 followers, he wrote: “One of the most complained about moments of the decade?

“Yes… But also one of the most impactful conversation starters the country has ever seen. The dance saw a police officer kneeling on Ashley

Talking about the dance, he said: “I don’t think we anticipated the level at which this would cause a sort of uproar.

“To be the second most complained about television moment in the last decade pretty much 25,000 people took a time to fill out a form and complain that came as a bit of a shock.

“If the fact black lives matter makes you feel uncomfortable you have to ask yourself why.”

Ashley said he was grateful for the support from fans and was happy with the conversation about racism the performance provoked.

“That four minutes it caused hours, weeks worth of conversation,” he said. The performance sparked conversation about racism across the country

“Stand by what you believe in and speak up for it because if you do you can make change.”

Earlier this week Ashley said said he was left fearing for his safety after Diversity’s BLM dance on Britain’s Got Talent.

The star said he worried about running into groups that “really disagreed with me”, describing people’s reaction as “visceral”. He told GQ: “So there were points when I was genuinely worried, you know, points when I would think to myself, ‘Will it be safe to go here or go there?’

“Even now, you know, sometimes I’ll look and go, ‘That could be a group of people that really disagrees with me’; you don’t know how they’re going to [react] when you put your neck out on the line for what you believe in. The dance proved controversial with viewers who called it ‘political’

Despite the backlash, the Black Lives Matter dance has been backed by the TV watchdog Ofcom.

The decision has upset some viewers, with one insisting: “We need a petition to get rid of Ofcom.”

A spokesperson for the watchdog said: “We concluded that the programme did not raise issues which warranted investigation under our broadcasting rules.

“We carefully considered a large number of complaints about this artistic routine, an area where freedom of expression is particularly important. “Diversity’s performance referred to challenging and potentially controversial subjects, and in our view, its central message was a call for social cohesion and unity.

“Any depictions of violence by the performers were highly stylised and symbolic of recent global events.

“There was no explicit reference to any particular political organisation – but rather a message that the lives of black people matter.”

It came after ITV said they were standing by the dance – and Britain’s Got Talent stand-in judge Ashley Banjo. A spokesperson told HOAR Online: “Britain’s Got Talent has always been an inclusive show, which showcases diversity and supports strong storytelling in all forms.

“ITV stands behind the decision to broadcast Diversity’s performance on BGT.

“Ashley and the group are a great example of the talent, creativity and diversity of modern Britain and their performance was an authentic, heartfelt response to many of the issues and events which have affected society in 2020.”

Love Island viewers furious as Michael has his head turned by the twins as...