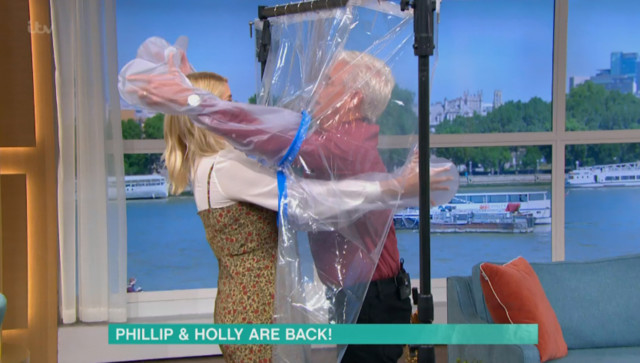 HOLLY Willoughby shared her first hug with Phillip Schofield in six months using a “cuddle curtain” as they reunited on This Morning.

The co-presenters and best pals embraced through a plastic sheet as Phil joked “it’s like we’re in prison”.

Holly said she was jealous when she saw guests Ant McPartlin and Declan Donnelly sat together on the sofa.

They’re being rigorously tested for coronavirus every four days as they film TV shows together.

Keen to get up close and personal with her on-screen other half, Holly brought out the “cuddle curtain” – a coronavirus invention designed to let people hug without touching.

“Are you ready?” asked excited Holly. The best pals used a ‘cuddle curtain’ to safely hug They were thrilled to be reunited They hadn’t hugged in six months

“Oh wait where does my face go?”

After figuring out where to put their arms in the plastic sheet, Holly said: “Oh I don’t want to let go. Holly tried on a personalised mask Ant McPartlin and Declan Donnelly were their first guests

After kicking off the show, Holly spoke about her sudden dash home from Portugal two weeks ago.a

Her family were forced to cut their summer holiday in Portugal short so she could quarantine at home in time for their start date.

“My break was all lovely, just away with the family.

“It was pretty bad timing, but it was worth it.

“I’ve come straight from quarantine so I feel a bit… I haven’t seen any humans.” Last week Holly shared a short promotional video from the ITV morning stars announcing their return to British tellies after their summer holidays.

The video included Good Morning Britain’s Piers Morgan and Susanna Reid, Lorraine Kelly, some Loose Women panellists and the This Morning  hosts themselves.

Holly could barely contain her excitement at the idea of seeing Phil again.

“This September we are all back… a new term begins!” she captioned the video.

Just 30 mourners will be chosen by the Queen to attend Prince Philip’s funeral...