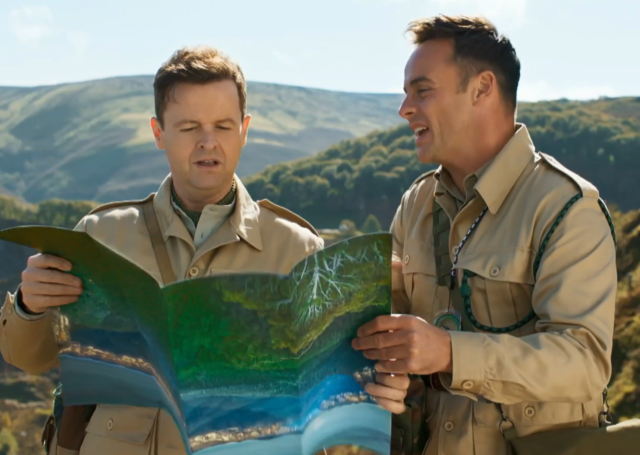 I’M A Celebrity… Get Me Out Of Here! have finally teased the first look at the new series, with Ant and Dec starring in a hilarious trailer.

The short clip sees the Geordie duo arrive in Wales, where the show will be filmed this year.

Ant and Dec star in the new trailer

However, the cheeky presenters appear to have missed the memo that they won’t be shooting in Australia for the first time in the show’s history – with the pair believing they are Down Under.

In the video, cheery Ant McPartlin steps out of a cab into the Welsh countryside, exclaiming: “G’day Australia, ah it’s great to be back.”

He then unceremoniously steps in some cowpat, joking: “I would hate to see the kangaroo who left that!” The duo think they are in Australia

They pay the cabbie in dingo dollars before being left confused by the sheep and general area – which looks nothing like their map of Australia.

The promo was filmed on location in Llandovery, Carmarthenshire, Wales and ends with the pair walking in the opposite direction to a signpost that directs them to the castle.

To add even more authenticity to the advert, a Welsh voiceover then teases that the series will be returning to our screens soon, with it set to launch in November. Ant tries to pay the cabbie in dingo dollars The oblivious stars walk right past the sign to the castle

The show is due to to start filming at Gwrych Castle in Conwy next month after ITV bosses splashed out more than £1million to hire the building for six weeks as the ongoing coronavirus pandemic ruled out the show’s usual setting in the Australian jungle.

It is yet to be revealed which celebs will be appearing in the show, but Vernon Kay, AJ Pritchard, and Tamzin Outhwaite have all been linked.

Meanwhile, Ant and Dec filmed themselves being tested for coronavirus as they explained that they don’t have to social distance while working together as they are checked for the deadly disease every four days.

The pair are in a bubble with eachother’s households, which helps them with presenting duties including Britain’s Got Talent, which ends tonight, and upcoming I’m A Celeb.