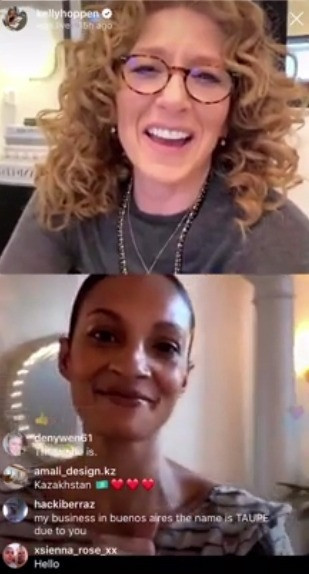 ALESHA Dixon gave fans a tour of her incredible mansion as she asked an interior designer for advice on how to arrange her home.

The Britain’s Got Talent judge left viewers in awe last month when she revealed her garden that looks like a park, and Alesha, 41, has now shared a glimpse inside the grand abode she shares with partner Azuka Ononye, 39.

Taking to her Instagram Live, the mum-of-two chatted to celebrity designer Kelly Hoppen from the largest room in the house and admitted she had struggled to make it feel homely.

Alesha revealed that her home is in fact a listed building with stately interiors, and she told her pal: “I would love to get your opinion.”

She added: “We don’t really hang out in here because it doesn’t feel warm.”

Kelly, 60, asked her to take her around the regal room, and though it was decked out in luxury the designer had her own ideas on how it should look. She started: “What I need is for you is to stand at one end and show me the whole room. The fire place has great symatry, a beautiful big sofa, you’ve got lots of light.”

And added: “The plant needs to be bigger.

“Look, the thing is the room is grand there is no two ways about it, but what you need is a cabinet of some sort. You don’t want to build on the large wall, build something so the television is in it so you’ve got some nice shelving.

“I would go quite modern and maybe even pull out a neutral colour. Maybe a slightly different colour, so it looks unique. So you’re not all matchy matchy … I’ll send you some nice ideas.” Alesha has a huge pink sofa that is barely used Kelly told Alesha her coffee table could be moved to the corner of the room and replaced with a bigger one, to more room for the kids to run around.

She added: “You can then put books, candle, flowers on it. That will bring the whole room together.

“It’s a spectacular high room, but you need to bring it in. A new coffee table and lamp will change it overnight. It needs to be a controlled mess – it’s lacking stuff.

“When you put on a dress you then think ‘I need jewelry, shoes, a handbag’. This room is missing the dressing. That’s what I love to do. The sideboards need to be haphazard.”

She also said that the barely used sofa and its rigid cushions needed to change, asking why Alesha had ‘karate chopped’ her cushions, saying it looked like they lived on a yacht. Alesha has two kids with her partner Azuka

Making the most of the gorgeous weather lately, Alesha headed out to her garden to spend the day with her husband and their daughters Azura, 6, and seven-month-old Anaya.

Captioning her photos, she wrote: “Heaven.”

The UK Government has been clear about social distancing and staying at home to save lives and relieve the strain on the NHS amid the coronavirus pandemic.

And when the singer innocently uploaded a series of sun-soaked photographs on Instagram, some angry fans mistakenly thought she was out in public. Alesha was in the garden with her family

It’s easy to see how they could confuse the star’s gigantic garden for a park because of its size and perfectly cut grass.

Lots of disbelieving fans asked: “Is that your garden?” Alesha looked relaxed and happy as she sunbathed Alesha relaxed in the heat with a vegan ice cream

Another follower questioned: “Please tell me this is your garden and your not out in a park??????[sic]”

While some realised they were looking at the garden of a celebrity, commenting: “Wow looks like a park! Very lucky!!”

One fan wrote: “You’re not meant to be out in public space – ohh wait…looks amazing x.” Alesha’s adorable daughters were outside with her Universal Credit wait should be slashed to two weeks, MPs demand in a win...