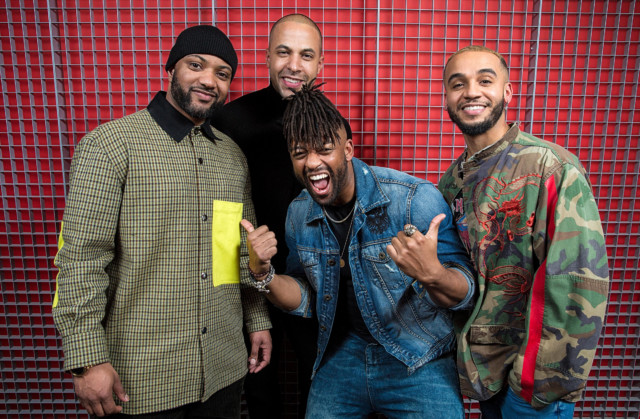 HE turned them down when they finished runners-up on The X Factor in 2008.

But Simon Cowell could work with JLS after all — as long as he coughs up the big bucks.

I’m thrilled to reveal that Aston Merrygold, Marvin Humes, JB Gill and Oritse Williams have been working on their first new music in seven years and are on the lookout for a label to snap them up.

Despite Simon snubbing the boys and only signing winner Alexandra Burke from that year’s series, JLS say they would still love to work with his Syco label.

In an exclusive interview, Marvin said: “He gave us the opportunity and the reason why we are where we are today.

“But he did pass on us first time around, which I’m sure he regrets. Aston Merrygold, Marvin Humes, JB Gill and Oritse Williams have been abiding by social distancing rules while in the studio “Whenever we see each other we always joke about it.”

Asked if Si would need to do a bit of grovelling, Aston replied: “Exactly.”

JB continued: “He’s got to make us an offer we can’t refuse.

“As much as we were disappointed on the final night, he was very upfront and honest. JLS’ hits included Beat Again, She Makes Me Wanna and Everybody In Love “But it worked out well for us anyway. So if someone did have something to offer us then we’d be all ears.”

Earlier this year I revealed the lads — whose five No1 singles include Beat Again and Everybody In Love — were reuniting for a huge arena tour.

But the pandemic has delayed that until next summer, giving them plenty of time to get some tunes ready to go — and working on their new sound. “The world has changed so much since we last recorded.

“For us there’s so many exciting possibilities of where we can take this new sound and this new era.”

Joking about the difference between JLS of old and the 2.0 version, he added: “Some of our hair has grown and some of us haven’t got any.”

Marvin added: “That’s probably just me. For me, personally, it is the first time I’ve sung in eight years. The foursome have been working with LostBoy, who helped make Lewis Capaldi’s Someone You Loved, Wayne Hector, who has written for One Direction, and Mike Sabath, who has produced tunes for Little Mix.

JB said: “We’ve already got a couple of songs that we’ve been really, really happy with.

“We love being in the studio. Obviously, we have had to use social distancing measures, so it’s not quite been the normal process.”

Marvin added: “Our chemistry is the same. It’s like we never actually left.”
But the lads say there is no time limit for when or if they’ll release an album.

Oritse added: “We’re here to stay. We’re back. This is a comeback, this isn’t just reuniting.”

Kate Middleton & Prince William share touching detail about being away from their children...