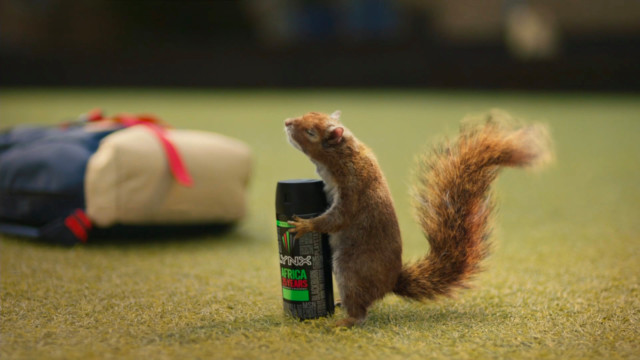 OUTRAGED parents have gone nuts at ITV for screening a pre-watershed advert featuring a squirrel trying to mate with a can of deodorant.

The commercial, seen by nearly nine million people, aired during Britain’s Got Talent on Saturday night at around 8.45pm.

The finale sees the squirrel similarly affected by the can — but some BGT viewers did not see the funny side and reported it to watchdog Ofcom.

One posted online: “We are watching this as a family. Can I ask why the inappropriate ad for Lynx with a squirrel getting it on with a deodorant can was on before the watershed? Complaint logged.”

Another fumed: “Inappropriate filth advert kids and I have just seen before the watershed. Sort it out.” It was launched to mark the deodorant brand’s 25th anniversary

The advert, marking the brand’s 25th anniversary, kicks off in 1995, before a Mancunian teen hurtles through time to meet the girl he fancies.

She sprays both of them, with predictable results, before the can rolls to the excited squirrel and its controversial climax.

The advert was shown around 15 minutes before the traditional 9pm watershed, when more adult ­content is allowed. Microsoft ‘to give new Halo game multiplayer away for FREE’ to compete with Call...

Coronation Street fans convinced Peter Barlow is innocent as they ‘work out’ who attacked...

Im A Celebs Roman Kemp FINALLY strips off but his shower scene is...