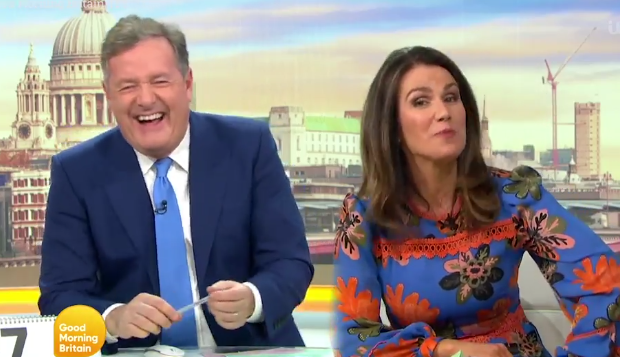 In fact he was so upset, he joked he was going to complain to broadcast regulator Ofcom.

Amanda, 49, had been due as a guest on today’s Good Morning Britain but she will now appear tomorrow after the show ran out of time.

Susanna Reid had Piers in stitches when she joked she’d been cut for wearing too many clothes following complaints that some of her wardrobe choices on BGT had been too revealing.

Piers said: “I want to ask her why she didn’t wear a more revealing dress to the final of Britain’s Got Talent.

“I was personally very disappointed. I’m going to make a complaint to Ofcom that Amanda was wearing too many clothes.” Amanda wore this glam gold number for the showpiece

He insisted she should have worn the risque number from a previous show that sparked 136 complaints.

Viewers of Saturday night’s final were just as shocked as Piers when it came to Amanda’s demure look.

She embraced a more modest look as she strutted onto the stage in a stunning sparkly gold evening gown.

The blonde beauty looked sensational in the glistening outfit – but viewers at home were surprised to see her flashing less flesh than usual.

Taking to Twitter, one fan wrote: “Disappointed to see Amanda Holden wearing so many clothes #BGT” Another agreed: “I was hoping Amanda Holden would have some more flesh on show as a middle finger to all the complainers.”

A third tweeted: “Amanda what happened to you I expected a more sexy dress!”

A viewer joked: “Now Amanda’s covered up this week they’ll probably be moaning her ponytail is too high instead.”

Last month, Amanda sparked over 200 official complaints when she wore a dress that “revealed her nipples” for one of the semi-finals.

Amanda later took to her Instagram page to deny that her nipples were on show, explaining that she was wearing a corset.

She said: “Who has nipples this close to their cleavage?!. As did this thigh-splitting gown

“FYI. A boned corset dented the girls all night,” by which she added a couple of fried eggs.”

Last week, a dress that fans compared to lingerie received over 100 more angry calls to Ofcom.

This series of Britain’s Got Talent has been the most complained about TV show in a decade with a staggering 27,898 complaints – led by Diversity’s Black Lives Matter inspired performance last month.

Labour Party manifesto 2019 how to watch the launch live

UK General Election 2019 news: Latest updates at 5am after Boris Johnson and Jeremy...