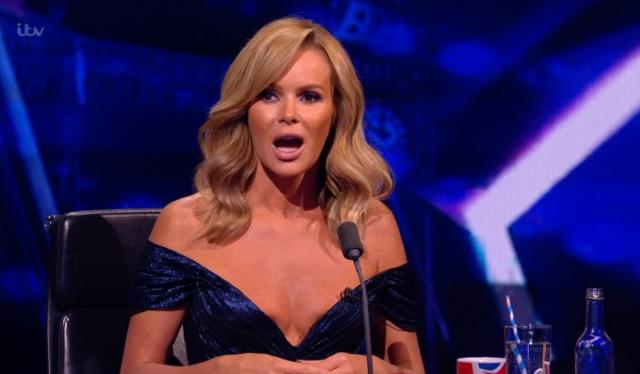 PIERS Morgan says he filed a complaint with Ofcom over Amanda Holden’s “nipple dress” – joking she was “wearing too much”.

The cheeky presenter poked fun at his former Britain’s Got Talent co-judge who is famous for getting viewers riled up over her daring outfits.

Last month, Amanda sparked over 200 official complaints when she wore a dress that “revealed her nipples” for one of the semi-finals.

“I was one of those people who complained to Ofcom about your dress,” said Piers told Amanda on Heart Radio today.

“But I only complained because I thought that you were wearing too many clothes.”

Amanda was forced to deny that her nipples were on show, explaining that she was wearing a corset. But she did cover up for the grand finale – leaving some fans disappointed.

Embracing a more modest look as she strutted onto the stage, Amanda wore a stunning off-shoulder sparkly gold evening gown. This series of Britain’s Got Talent has been the most complained about TV show in a decade with a staggering 27,898 complaints – led by Diversity’s Black Lives Matter inspired performance last month.

Did you miss our previous article…
https://www.hellofaread.com/britains-got-talent/simon-cowell-wants-to-marry-girlfriend-lauren-after-life-changing-bike-accident-gave-him-a-wake-up-call/

Strictly fans have the same complaint about musicals week – do you agree?

France could follow Britain’s lead and ‘Frexit’ out of EU, Michel Barnier admits

Malin Andersson reveals she’s struggling with her pregnancy and admits she ‘can’t wait for...

Jesy Nelson is trying to ‘save herself like Prince Harry’ as Little Mix rift...