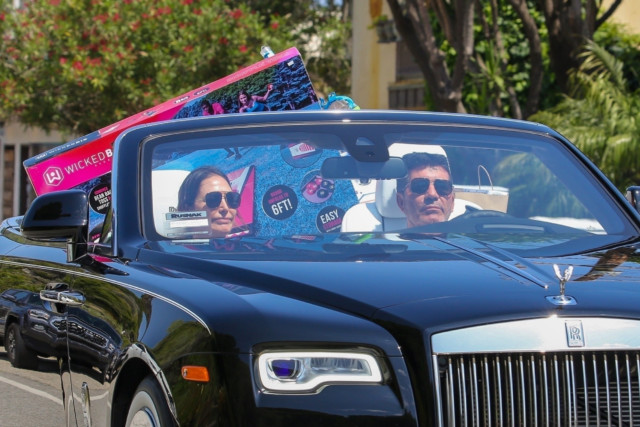 SIMON Cowell and Lauren Silverman were spotted making their way home in a car piled high with toys over the weekend.

The duo appeared happy and relaxed after their Malibu shopping spree – just days after it was revealed Lauren had accused Spice Girl Mel B of having an affair with Simon.

The couple appeared to be in good spirits

Simon – who ensured he was protected against coronavirus by wearing a face mask – drove his Rolls Royce before stopping to allow Lauren to quickly rearrange the toys in the back seat.

The brunette was all smiles as she held up one bag of goodies with six-year-old son Eric’s name on it.

The couple’s united front comes after HOAR Online revealed Lauren, 42, confronted Mel B, 44, about having an affair with Simon, 60, in a series of “angry text messages”.

Mel was said to have been left horrified by the accusations, with a source sharing: “Mel was so upset, she said: ‘It’s against everything that I stand for.’” One bag of goodies had son Eric’s name on it The couple had been to Toy Crazy in Malibu Lauren laughed as she tried her best to make more room

The insider added to The Mirror: “Mel also said: ‘Anyone who knows me, including Simon, knows I would never ever consider doing anything of the sort to another woman. I’m a woman’s woman.’”

A source previously told us that the affair rumours are “total nonsense”, sharing: “There is no affair and there never has been. Simon has never cheated on Lauren.

“Everything is fine between them.”

It has been said that Lauren gets “insecure” about the fact she and Simon aren’t married, and that she had become “very suspicious” over the attention he gets from female fans and his glam co-stars.