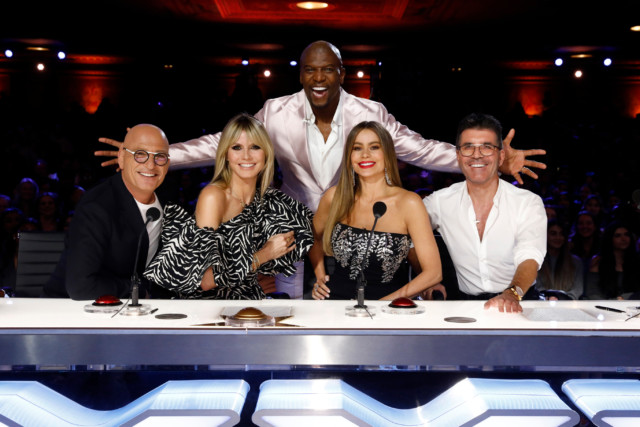 SIMON Cowell has revealed that America’s Got Talent’s Howie Mandel has bought him a trike to cheer him up after he broke his back.

The music mogul, 60, is recuperating in Los Angeles after his freak accident which saw him fall off his electric bike and narrowly avoid damaging his spinal cord.

Simon has so far missed the live show’s for the latest series of AGT.

To show he is missing his head judge, Howie sent a cheeky get well present.

Although a tricycle might not be quite what Simon wants to ride right now, the music mogul showed his appreciation for the gift.

Si posted a picture of the trike on his Instagram, and wrote next to it: “This just arrived at my house! Thank you @howiemandel” Howie sent Simon a tricycle to cheer him up

The picture comes after it was reported that Simon will miss the Britain’s Got Talent finals as he continues to recover from breaking his back.

He had hoped to be part of the shows via videolink, but now he will reportedly miss out altogether.

An insider told the Mirror: “Everything is fixed, he just needs healing time.

“Flying halfway across the world is not part of the plan and he has agreed to put his health first.” Simon Cowell will miss the Britain’s Got Talent finals as he continues to recover from breaking his back, it’s been reported” class=”alignnone” />

Former talent judge Piers Morgan has reportedly been ruled out of a return because of his rivalry with David.

HOAR previously revealed Simon would miss the semi-finals for the first time after suffering his injury.

A clash of filming schedules with the show’s US version caused by Covid-19 has also further complicated matters. Simon had hoped to join his fellow judges via video link

Doctors in California have warned Simon he is facing a “hard recovery” that will include weeks in a back brace and intensive physiotherapy.

A source said: “Simon has a long and difficult road ahead.

“He has told friends and colleagues that he wants to be back at work immediately but they’ve had to remind him that this is a very serious injury and he needs to just rest and recuperate. It’s going to take him weeks, and maybe months, to get back to where he was.

“And if ignores the doctor’s orders then it will be very bad news for him long term.”

Simon has been ever-present on BGT since it first came to screens in 2007.

The interrupted series is set to return with a one-off catch-up show.

It will then run semi- finals on Saturday nights during the autumn.

EastEnders’ Adam Woodyatt reveals all on his future on the soap