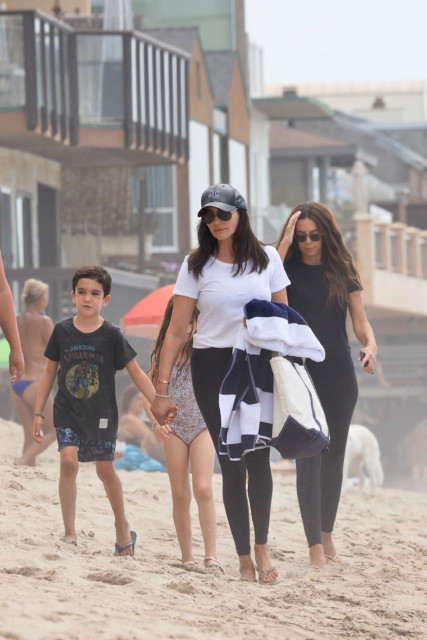 SIMON Cowell’s current girlfriend Lauren Silverman and his ex Terri Seymour hit the beach as the music mogul recovers after he broke his back.

The 60-year-old is recovering in LA after a six-hour op to repair his spine, which he injured when falling off his bike in Malibu.

Simon Cowell’s partner Lauren Silverman (centre), 43, is joined on the beach by his ex Terri Seymour and their respective kids, Eric and Coco

As Simon recovers in hospital with the aid of healing crystals, the women in his life took a break from supporting him to go for a stroll on the beach

Lauren, 43, brought along the couple’s son Eric, six, and Terri, 48, also brought her daughter, Coco along to the beach.

The latter stayed sitting in on the sand and watched the others enjoy the water as Lauren joined the kids for a play.

She kept her look casual in a white t-shirt, black leggings, sunglasses and a black leather cap. The pair have become friends after Simon dated Terri until 2008 They watched on as the kids played in the water Until Lauren decided to join them for a splash herself

Other than enjoying a beach stroll, Lauren has been making sure to keep Simon company in hospital after his freak electric bike crash.

Last week, he broke three vertebrae, missing his spinal cord by a centimetre, in the horrendous fall.

A source told The Mirror: “Lauren has been to the hospital to drop a few things off once each day. She has been making his favourite Italian bean soup and also Cottage Pie with turkey, which he loves. “His diet is incredibly healthy but there’s nothing better than traditional English comfort foods and treats when you’re on the mend.

“Cowell is in hospital after falling off his new electric bike at his Malibu home last week. He narrowly avoided being paralysed as the impact was ‘a centimetre’ from his spinal cord.”

She also set up an array of healing crystals to help Simon’s recovery journey.

A source said: “Two of his friends had searched out and delivered some powerful healing energy crystals which he has with him. He had a freak electric bike accident last week “Most people wouldn’t put Simon down as having crystals but he and Lauren have them around their home.”

Simon is believed to be discharged this week, having already returned to work from his hospital bed.

The source continued: “Simon has been up walking and moving around again faster than doctor’s had predicted, although his friends are reminding him it’s important to heal before rushing back to work.”

Show some common sense and scale down your Christmas celebrations this year – like...

Caroline Flack’s best pal urges fans to ‘look after their friends’ as she marks...

The Queen once played Pointless with Alexander Armstrong and was ‘so competitive’ she won...