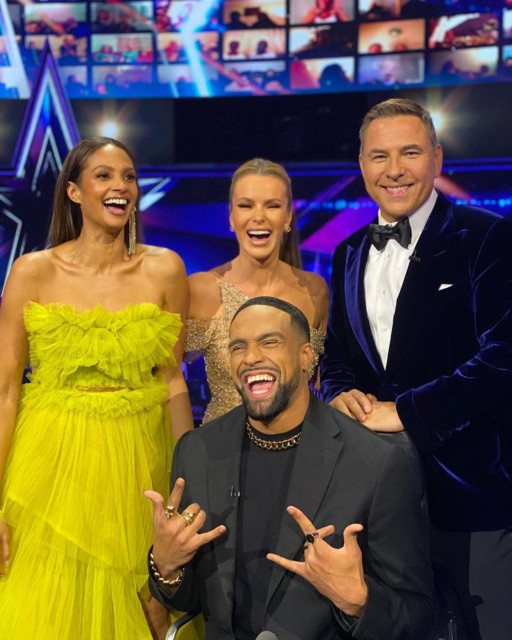 TWO of Britain’s Got Talent’s judges have been forced to self-isolate after three of the show’s crew tested positive for coronavirus.

Half of the ITV judging panel – made up of Alesha Dixon, David Walliams, Amanda Holden and Simon Cowell’s stand-in Ashley Banjo – were told they must legally stay indoors for 14 days.

Half of the judging panel were made to isolate

HOAR understands they came into close contact with at least one of the crew members on the show’s Christmas special, who were sent home after their diagnosis.

A source said: “The production staff in question work closely with the judging panel, particularly two of them, meaning that once they had a positive test it was bosses’ duty to inform them and send them home.

“They’re now left at home for the foreseeable, and will have to take a test too before they can stop quarantining.

“The likelihood is they’ll come back negative, but they’re taking no chances and can’t be too safe right now. So they’re playing a waiting game for now.” They are taking no chances with the virus

HOAR revealed earlier today how the festive one-off was dramatically shut down this morning after an outbreak on set.

At least three crew tested positive for the illness before the first day of filming the one-off.

Panicked bosses then immediately closed down the entire production, despite the fact that cameras were ready to roll.

Crew for the show, which will see the nation’s favourite BGT acts return to the stage, were told last night not to turn up for work today. The outbreak occured on the Christmas special

And production staff who tested positive, and those who work closely with them, were told they must self-isolate in line with government guidelines.
source said: “It’s the last thing Britain’s Got Talent bosses would have wanted on day one of the new production.

“Everything was ready to go so they’re gutted it’s immediately ground to a halt. Everyone was told to stay away and those involved now must self-isolate.

“They can take no chances, particularly with some of the returning winners potentially vulnerable.”

A spokeswoman for the show told HOAR: “As a result of a positive Covid-19 result received yesterday we have implemented our protocols and a number of crew members are self-isolating at home. The set dramatically shut down this morning Jon Courtenay was the winner of Britain’s Got Talent 2020

“As a result, we are unable to continue filming our BGT Christmas Special today and have taken the decision to postpone.

“The safety of all those involved in the show is our number one priority and we follow extensive Covid-19 related procedures to adhere to all Government guidelines.”

EastEnders spoilers: Ben Mitchell in gun horror as he tries to save dad Phil...

Shirley Ballas takes savage ‘swipe’ at Strictly’s Dianne Buswell – but did you spot...