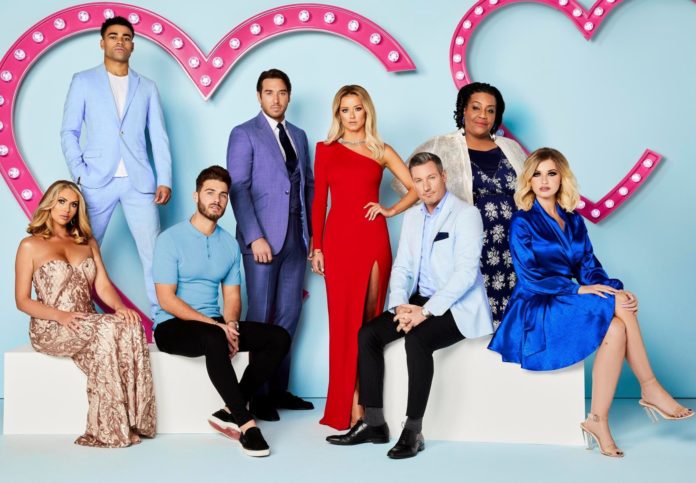 CELEBS Go Dating is back on our screens for 2020 with a lineup of famous singletons looking for love.

The Channel 4 show returns TONIGHT on E4 at 9pm, for another instalment of series eight, starring unlucky in love celebrities including Olivia Bentley from Made in Chelsea, Towie’s James Lock and Amy Childs, plus Eastenders actor Dean Gaffney.

Mum-of-two and Towie favourite Amy, 29, is loved for her ditsy personality and memorable for a funny scene in the reality show involving her “vajazzling” Sam Faiers.

Amy was born June 7, 1990, and shot to fame in 2010 by appearing in ITV2’s reality TV show The Only Way Is Essex and briefly dated fellow cast member Kirk Norcoss.

She has also taken part in other reality shows including Celebrity Big Brother and The Jump.

The reality star is reportedly worth £5million through her fashion and beauty products.

Known as a lad’s lad, the 33-year-old Towie star burst on to our screens in 2013 with bestie Dan Osborne.

The duo caught the eye of a number of the female cast, but James was quickly taken off the market as he met long-term girlfriend Danielle Armstrong, but the pair split back in 2016.

Since joining Towie James quit his job as an electrical company supervisor and opened a restaurant called Lockie’s Kitchen in Essex.

Posh girl Olivia joined the cast of Made In Chelsea on 2016 and caused her fair share of drama.

She was suspended by E4 bosses after she was caught sniffing cocaine at a party, but was given a second chance and returned to the show.

She is reportedly the great-great-great granddaughter of W.O. Bentley, the founder of the luxury car firm.

The 41-year-old EastEnders actor, who played Robbie Jackson in the soap was axed last year after some “bad personal decisions” but is now working hard to get his (love) life back on track.

The telly star is a doting dad to his 22-year-old twin daughters who have banned him from dating younger women their age.

The soap veteran found fame on Albert Square aged just 15 and has since starred on I’m A Celebrity, coming fifth in 2006 and Extras with Ricky Gervais.

Love Island’s Amy, 29, sensationally quit the show in 2019 when she was cruelly dumped by Curtis Pritchard.

The former air hostess from Sussex was left heartbroken after the professional dancer called time on them being “half-boyfriend and girlfriend”.

The blonde beauty reportedly spent £20k on changing her look before joining the show.

Shortly after leaving the villa Amy landed herself a role as a guest panellist on Loose Women.

The 21-year-old telly hunk rose to fame in 2016 as Prince McQueen on Hollyoaks and before that he starred in BBC series The Dumping Ground.

Malique was born in Manchester on February 2, 1998, and attended Oldham College where he studied acting.

The young actor entertained us on I’m A Celebrity back in 2018 taking on several trials including a savage eating one.

He reportedly dated campmate Harry Redknapp’s granddaughter Molly, after they grew close at the I’m A Celeb wrap party.

The 45 year old bubbly showbiz reporter on ITV’s This Morning rose to fame after her appearance on the third series of Big Brother in 2002.

Alison has appeared on numerous TV shows including the twelfth series of Strictly Come Dancing as well as a Hollywood debut in the animated film Hotel Transylvania 3: Summer Vacation.

She announced joining the show Celebs Go dating in an Instagram clip writing. “The Secret is out” alongside her promotional clip.

In the video she states the the reason she has joined is: “Because I’m looking for the one who can make my heart sing.”

Joshua Ritchie is the 25 year old television personality from Bolton.

He appeared in the first series of Love Island alongside Lauren Richardson in 2015 before appearing on Ex On The Beach and presenting, Tattoo Of Us in 2018.

The reality heartthrob was in a relationship with fellow reality star Charlotte Crosby and appeared as contestants on Celebrity Coach Trip before allegedly parting ways at the end of 2019.

The ex-lovebirds previously appeared together in the seventh series of Celebs Go Dating with Charlotte saying: “We have joined the agency because we think we could really benefit with some professional advice and guidance in where we’re going wrong in our relationship”- let’s hope Joshua has learned some tricks for this new series…

Taxpayers fork out £100million a year locking up 2,000 foreign crooks who should be...