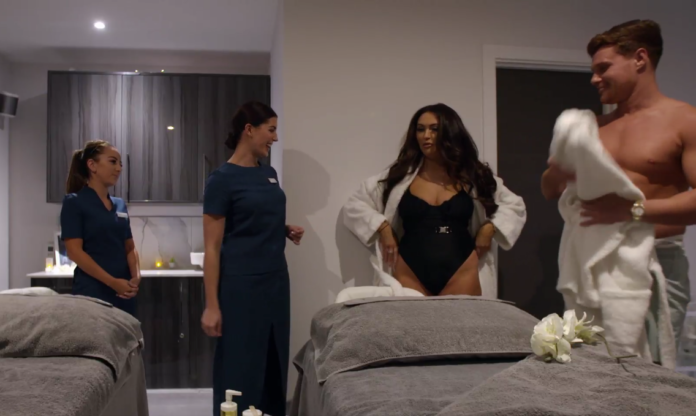 CELEBS Go Dating fans will see Charlotte Dawson and ex Matt Sarsfield attempt to rekindle the romance in their relationship in tonight’s episode.

The pair, who sadly confirmed they had split in early March, enjoy a sensual couple’s massage as part of a relationship cleanse.

In a black swimsuit with a waist-cinching belt, Charlotte looked every inch the glamour star as she settled in for a massage, which led to Matt taking charge and getting his hands on her.

“That’s what me and Matt need, a bit of quality time together with no one but us,” says Charlotte before the pair embark on some cheeky innuendo when the former rugby player admits Charlotte likes it “deep”.

As Matt took over the massage, Charlotte jokes it feels like a “donkey punch” before the pair dive into a cryo-chamber which claims to help people burn anywhere between “300 and 800 calories”.

The chamber, which is set at -35 degrees celsius, sees the pair flirt as they mock each other’s pain but can Charlotte handle the temperature?

Sadly the therapy didn’t work as in early March the presenter, 27, moved out of their newly refurbished home and admitted she staying with her mum as she tries to work through her problems with her ex.

A source said: “Charlotte is utterly heartbroken, she really thought Matt was the one but they just can’t seem to make it work.

“She thinks Matt always blames her when things go wrong but she really doesn’t think it’s always her fault.”

Charlotte is the daughter of late star Les Dawson

They reconciled before buying their home but recently confirmed their split

The source added: “Matt knows she has a huge fan base and is always worried about what she will say about him but the pair are both keeping quiet about it… for now.”

I would give Kieran Hodgson and Channel 4 thirty years to life for Prince...