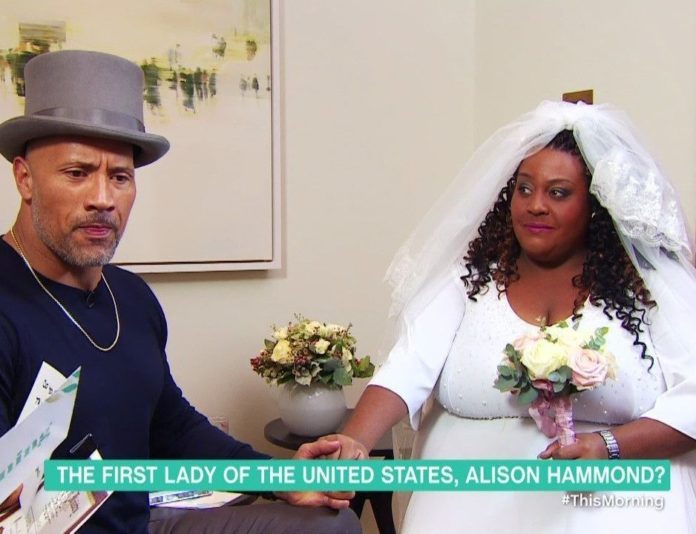 ALISON Hammond is famed for her flirty interviews with the world’s biggest stars on This Morning – but her real-life men couldn’t be more different.

While she famously married The Rock on the show – and jokingly puts the moves on countless other famous faces – the presenter stays away from other celebrities when it comes to her real romances.

The big-mouthed Brummie shot to fame on Big Brother back in 2002 and even starred in dance show/celebrity dating service Strictly Come Dancing in 2010.

But Alison likes her men down-to-earth, marrying a cab driver, dating a security guard – and now seemingly head-over-heels for a technician and reality TV fan.

Yesterday, we showed you pictures of the 45-year-old former holiday rep and 41-year-old Ben Kusi on a date after “finding love” on Celebs Go Dating.

And, as her past relationships – which she very seldom talks about – prove, Alison likes to keep her romances a world away from the red carpet…

Alison and audio technician Ben were snapped arm-in-arm on a date in London this month – with them both looking loved up.

She and the 6ft2in bloke recreated the pottery scene in romance classic Ghost on Celebs Go Dating, with her raving to This Morning co-star Holly Willoughby: “He’s fit.

“I could see later on, I will want to rip his clothes off. I can see a future potential. He looks great. He’s beautiful.”

Ben is not only a huge fan of Alison’s but of Celebs Go Dating in general – having also appeared as one of Gemma Collins’ potential suitors in 2018.

TV star Alison found love again in 2014 after meeting single dad Jamie on an online dating site – and they even got engaged.

The Sun revealed the news, with a source explaining: “He’s a security guard, which suits Alison fine. She may be a celebrity, but she’s incredibly down to earth and doesn’t have any airs or graces.”

However, the relationship didn’t last, with Alison explaining in 2017: “We split up. It’s the worst news ever. I don’t think I want anyone else now.”

Alison has been married before, to Manchester cab driver Noureddine, who is also father to their son Aiden, now 13.

She discovered she was pregnant soon after appearing on the third series of Big Brother, where she won a legion of fans for her high-energy antics, which included breaking the garden table while jumping on it.

The star refused to name who the father was at the time, but later posed for a magazine shoot together while she was three months pregnant.

Strictly’s Ellie Simmonds breaks down in tears as she says dance partner Nikita has...

Kate Middleton had her ‘heart set’ on a very different name for Prince George,...