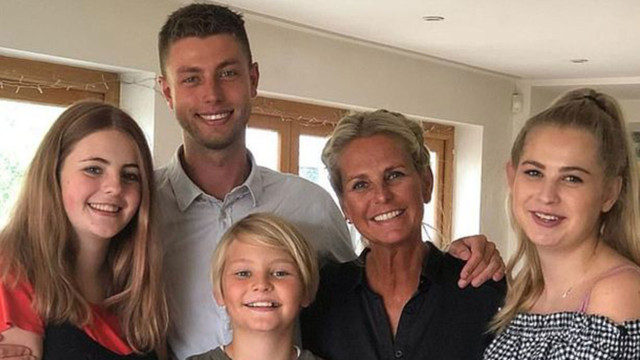 ULRIKA JONSSON is a Swedish presenter and model, mostly famous for presenting Gladiators on ITV during the 90s.

Meet Ulrika’s four children – who are all from different fathers.

Ulrika has four children all from a different father

Ulrika has been married three times, her first husband being John Turnbull who she got married to in 1990 but then split with in 1995 after she cheated on him.

In 2002, Ulrika confirmed that she had a brief affair with England football manager Sven-Göran Eriksson while dating Italian lawyer Nancy Dell’Olio.

She then married Lance Gerrard-Wright in 2003, but they only lasted three years as husband and wife.

Her last marriage was with Brian Monet but they parted ways in 2019 after eight years but kept co-parenting throughout the pandemic, which despite the break up, still brought the two closer. Ulrika previously opened up on her unsuccessful marriages and she said: “You can only resolve problems with another person.

“If I’m honest, getting another divorce age 51 is not where I thought I would be, so who know? I just don’t know what shape my future will take.” Ulrika and Cameron went to the Royal Ascot together on June 14, 2022

Cameron is Ulrika’s first born from her first marriage with John Turnbull.

He is now 27-years-old and went to university to become a film director.

He maintains a great relationship with his mum, who admitted that letting him go for university was one of the toughest things she had to face.

On September 17, 2020, Ulrika wrote on her Instagram about when she dropped off her son to university.

The post said: “This day SEVEN years ago, I dropped you off at Uni. Drove home and mourned for 3 months.

“Couldn’t go in your room. Sobbed every night I laid the table for one less. Felt heartbroken, bereft.

“For all those parents going through the same right now: it does eventually get better.

“And then they come home penniless, hungover and qualified as plonkers (and in Goldenballs’ case, Film Director).”

Ulrika doesn’t show off many pictures of her children but sometimes she pops a selfie or two.

In November, she shared a picture on her Instagram story with Cameron, claiming that he visited her in between filming of Celebs Go Dating. Bo was born in 2000 with a congenital hear defect.

In an article written by herself, Ulrika said how Markus’ “main driving force” was that they “have a child together.”

Ulrika happily welcomed Bo into the world but she claimed that she never met and never wants to meet her father, after he walked out on them following a life-saving heart operation that Bo underwent as a baby.

The conversation about her biological father came up when Ulrika married Lance and he acted as a father figure to Bo.

That is why the Swedish presenter felt the need to have a talk with her daughter – who at the time was only eight-years-old – about her real father.

Bo often felt “left out” because of her father’s absence but admits that when her mother tried showing her pictures of him, she felt nothing, as if she was showing her a “stranger.”

Despite this, Bo still has a family in Ulrika and her other children that love and support her. Martha is the third eldest daughter and Ulrika had her when she was married to businessman Lance Gerrard-White.

When Martha turned 16 in 2020, Ulrika wrote a heartfelt message on Instagram and after went on to have a boozy party to celebrate her daughter’s birthday.

Ulrika said how strong Martha is, as she fight for social causes such as racism and gay rights.

She also expressed how she wanted another child following Bo’s struggling birth.

Martha’s birth would have been easier, but four weeks before, Ulrika fell and broken her ankle.

As she said, she was “forced to stumble around with a plastered leg; sizeable belly; crutches and ridiculously sized breasts.”

She added: “True, I hadn’t really experienced tantrums til she came along.

“There were whispers of “third child syndrome” but she never fitted a template, our Martha.

“She just stamped her feet and repeated time and time again: “I just don’t wanna.”

“I gave her the nickname Moo because her eyelashes were unashamedly long, like moo cows.

“Everyone adored her – her beauty; her breathtaking brightness and ability to learn but it was her spirit which eclipsed all else.

“Now at 16, she has grown into our very own social justice warrior – strong on feminism, racism, gay rights and environmentalism.

“She is militant in her approach and relentless in her response. She’s empathetic and cared for others and cannot bear injustices.

“She is confident but shows humility and has the best resting b****face in the business.

“She’s an education; a whirlwind and a passionate sensitivity. We salute you, Moo. (Mummy hopes you enjoy your books about feminism and female sexual fantasies. Yes, you read right).” Malcolm is the youngest of the family and Ulrika gave birth to him in 2008 when she married Brian Monet.

Ulrika stressed over Malcolm when she found out he was getting bullied at school and felt guilty that she had “different expectations” for her son.

She told Best magazine: “My boy was the subject of a bullying campaign a year or so ago and it nearly killed me.

“I felt I was expecting him to have greater resilience than my girls and, all the while, I wanted to shield him from the pain.

“In short, I had different expectations of him and I shouldn’t have. Am I the only one who thinks we need to tip the balance of attention in favour of our boys a bit more?”

Later on in 2021, Ulrika expressed how thankful she is for the UK Home Office to grant Malcolm a Settle Status and let him stay here in Britain alongside his mum. Ulrika was worried that the home office would reject his application and Malcolm would have to be adopted by his father Brian who lives in the States and have him far away from her.

It all turned out well for Ulrika and Malcolm, and they are still by each other’s side now, probably talking about lightsabres, which Malcolm seems to really like.

I need a hip replacement and battling arthritis – its agony trying to get out of bed, says Ulrika Jonsson

Corrie’s Samia Longchambon, 38, shocks fans as she looks identical to her niece

General Election 2019: Boris Johnson says voters can have 150bn in investment for Christmas...