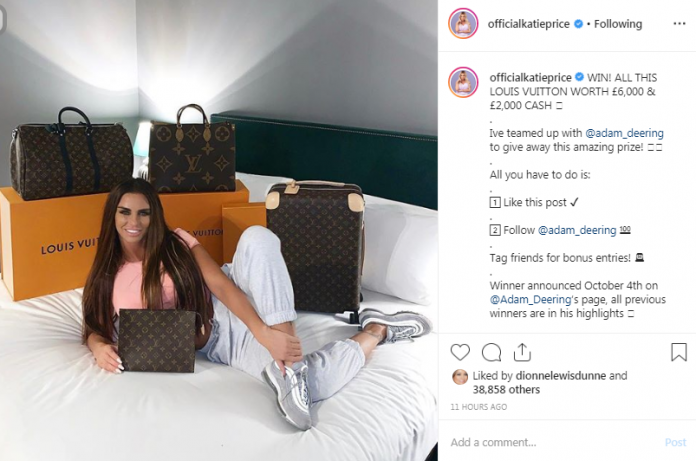 CELEBS including Katie Price, Wes Nelson and Vicky Pattison have been branded as irresponsible by campaigners for using Instagram to promote the boss of a debt firm with a 50million empire.

Models and reality TV stars have been promoting cash giveaways on the social media network as part of paid partnership posts.

The prize offers winners thousands of pounds worth of Louis Vuitton merchandise, up to 3,000 cash or holiday vouchers in exchange for liking the post and following the account of Adam Deering, CEO of Hanover Insolvency.

His firm provides Individual Voluntary Arrangements (IVAs) as well as other debt solutions to those struggling with debt.

An IVA is a legal way to avoid bankruptcy. Insolvency firms set up an agreement with companies you owe money to so you can pay back the debts over five years.

Most firms charge a fee for setting them up and they can have a negative effect on your credit file.

Mr Deering, 38, has been paying celebs such as Love Islands Michael Griffiths and Georgia Steele, and ex-Geordie Shore star Marnie Simpson to promote his Instagram page.

But debt experts warn that this kind of marketing can easily confuse vulnerable people into taking out an IVA unnecessarily.

It’s irresponsible for celebs to be pushing this as a lifestyle choice when other, better options may be available, Resolvers said Martyn James.

Filing for bankruptcy or insolvency is not a quick fix to your debts – it can have a huge and lasting impact on your finances and should be a last resort.

Jane Tully, director of external affairs at the Money Advice Trust, the charity that runs National Debtline, added: This doesn’t sit right at all.

What help is there if you’re in debt

IF you’re struggling with debt then you can get help.

A DMP is an informal agreement so you can stop it at any time and resume the normal debt repayments, or adjust your payments if your circumstances change, like you lose your job.

It ends when you’ve paid off the debt so it could last for decades.

The plan is proposed to creditors individually so there’s not guarantee that the interest will be frozen.

Many firms charge a fee for the service, either upfront or one that’s incorporated into your monthly payments.

You can get a free DMP from the National Debtline, StepChange and PayPlan.

It’s a lesser form of bankruptcy, which is a legally binding agreement with your creditors to pay off your debts over a set period of time that has been approved by the courts.

It must be set up by a professional called an insolvency practitioner who will charge a fee of around 5,000.

Your repayments are made to the insolvency practitioner who distributes your cash.

If you come into some money during your IVA then your creditors may have the right to claim it.

If you have any savings or pension payments then these will go to your creditor. If you own a home you may have to remortgage it. You may also struggle to get credit while repaying an IVA and details of the agreement will remain on your credit file for six years.

If you fail to make repayments then you could be made bankrupt.

The debts are written off after five years, regardless of whether you’ve paid them off in full.

A DRO is way to have your debts written off if you have under 20,000 of debt and no assets. You have to pay a 90 fee, make repayments and after 12 months your debts are written.

You can’t apply for a DRO if you’re a homeowner. It will negatively affect your credit score for six years and it maybe difficult to get credit during this time and details will be published publicly.

Bankruptcy is a last resort if there is no other way to repay your debts. It lasts from one year to up to three and you’ll be asked to make repayments during this time.

It is much more difficult to get credit after bankruptcy and your credit rating will be affected by up to 6 years.

You could lose your house, possessions and some professions won’t let you work if you’ve been made bankrupt.

If you own a business it could be sold and the details of your bankruptcy will be published publicly.

I would urge celebrities to think very carefully before promoting content from any individuals or companies that are trying to use Instagram to make money out of people in debt.

Insolvency is just one of a range of options available for people struggling with debt.”

Adam Deering’s Instagram page clearly states that he is CEO of the firm, and by asking competition entrants to follow he is then exposing them to his business, debt advice as well as an inside into his life and other companies.

In a post 42 weeks ago on Instagram he replied to a follower who asked him if he gets rich from people in debt.

He said: “Define rich please? I measure my wealth by happy moments with my family and financial security and freedom for them.

“This is the same happiness and free done we give to our clients and their families on a daily basis”.

Michael Griffiths from Love Island 2019 has 1.3million followers on Instagram

Mr Deering has previously told of his own rags to riches lifestyle to publications such as Ladbible, has said that he nearly lost everything to drink and drugs in his early thirties.

He pulled it all back after a stint in rehab – where he roomed with troubled musician Pete Doherty in 2012 – after which he started his debt management business.

Mr Deering, who regularly posts pictures of himself in expensive cars or on luxury holidays, claims his empire, including Hanover Insolvency, are expected to turnover 50million, according to Ladbible.

Hanover Insolvency had a turnover of 516,048 last year, according to Companies House.

Some experts fear that IVAs a could be the next compensation scandal after the number that have been taken out has shot up by 490 per cent since 2003.

The celebrities referenced in this article were endorsing Adam Deering as an individual and were paid by him personally to promote competitions.

“At no point has any celebrity endorsed or promoted HanoverInsolvency, referenced any kind of debt solutions – nor have they been paid by us.

The spokesperson insisted that Hanover Insolvency gives free, impartial financial advice and all options are explained to customers.

He added: Any fees received byHanoverInsolvency are agreed by the creditors and represent a fixed industry standard.

“There is no one-size fits all solution to debts. Every case is different and we only suggest an IVA where it is absolutely the best solution for the individual – creditors have to agree to an IVA also.”

Vicky Pattison did not wish to comment.The Sun has contacted representatives for celebrities mentioned in this article.

How to cut the cost of your debt

Being in a large amount of debt can be really worrying. Here are some tips from Citizens Advice on how you can take action.

Work out your budget – by writing down your income and taking away your essential bills such as food and transport.
If you have money left over, plan in advance what else youll spend or save. If you dont, look at ways to cut your costs

Prioritise your debts – If youve got several debts and you cant afford to pay them all its important to prioritise them.

Your rent, mortgage, council tax and energy bills should be paid first because the consequences can be more serious if you don’t pay.

Get advice – If you’re struggling to pay your debts month after month its important you get advice as soon as possible, before they build up even further.

Here’s how No10 will decide which tier you are in – including R rate...

The Sims publisher cracks down on all paid mods