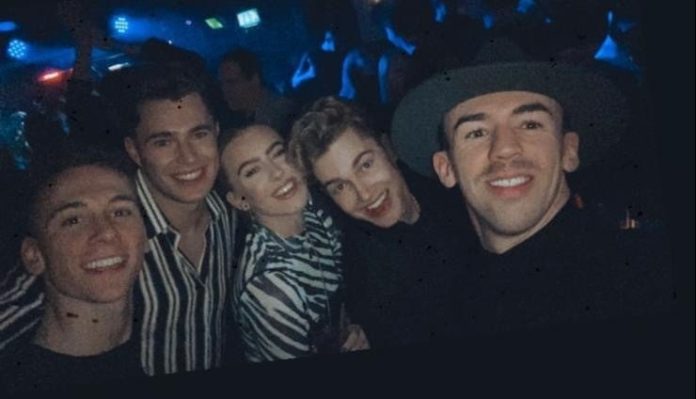 CURTIS Pritchard has grown close to a gorgeous blonde dancer who he performs with on his brother’s tour.

Insiders say that the Love Island star has been getting very close to Amber Pierson – amid his split with Maura Higgins.

“Curtis and Amber are really close – he’s been using her as a shoulder to cry on as his relationship to Maura fell apart,” says the source.

“They’re always hanging out together backstage at rehearsals and partying together. He’s actually seen her a lot more than he’s seen Maura these past two weeks.”

The pair were pictured hugging on a night out on Saturday – while Maura partied separately in London with former Love Islanders Chris Taylor and Joe Garratt.

Dancer Amber is friends with AJ’s girlfriend Abbie Quinnen, and has been rehearsing with Curtis and AJ all week for the show, which heads out on tour this Thursday for a month.

Maura announced the shock split on Instagram last night – just hours after her team and Curtis’s PR claimed they were still dating.

She wrote: “Curtis and I have made the decision to separate. We enjoyed a great experience from our time in the villa and want to thank everyone for supporting our relationship.

The pair hadn’t been seen together since 28 January, when The Sun’s Bizarre column witnessed them having a blazing row at the NTA’s.

At the time, they insisted they were still together – but weren’t seen together again. On 8 February, Maura wished Curtis happy birthday online, and he praised her on Valentine’s Day using an old photo.

Maura and Curtis were together for seven months, having first fallen in love during last summer’s Love Island.

Irish beauty Maura had her sights set on boxer Tommy Fury who was in a happy relationship with Molly-Mae Hague.

In a late series twist, Maura revealed she had grown feelings for Curtis in the villa and found the courage to confess to him after his relationship with Amy Hart failed to withstand the dreaded Casa Amor week.