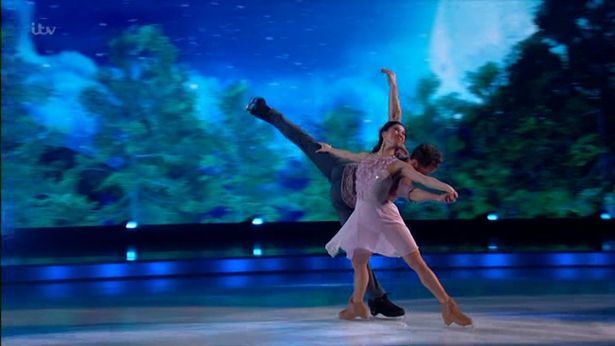 The performer, 26, was originally partnered with Olympic skier Graham Bell but was forced to withdraw after a nasty shin injury during rehearsals.

Yebin stunned audiences with her dance alongside Mark Hanretty

Yebin vowed to come back and dance with Graham – but he was eliminated in week two.

But she made a stunning appearance on tonight’s live episode as she took to the ice with fellow pro Mark Hanretty.

Mark also withdrew from the competition after Towie star Billie Faiers was forced to leave following an concussion in rehearsal.

Fans were stunned by the performance, with one person saying: “I loved the routine from @Mark_Hanretty and Yebin it was so beautiful well done guys. Made me feel warm inside”

Fans were emotional at her return

Another added: “What a beautiful performance by #Mark & #Yebin! I’m so happy to see Yebin back on the ice, I’m so glad she’s better!”

A third remarked: “Mark and Yebin their performance was beautiful”

Yebin’s horror accident was the first of many injuries and illnesses to befall the series.

The pro was “stabbed” with a skate’s blade, and the injury was so severe that it “exposed her tendons”. Yebin was carried away in a stretcher Graham Bell waited with his partner as she was taken away

Graham ended up skating with Karina Manta while Yebin recovered in the hospital.

At the time, Yebin shared a photo from Watford hospital and thanked NHS staff for looking after her. Yebin thanked staff in the hospital

“They were all so kind, so caring and looked after me so well on my overnight on Monday.

They truly are heroes!” she added.

“So grateful for the care I received. And my leg is feeling so much better already thanks to them

“Had a glimpse of what @drtom_onice and all of our dr. Family members and friends who works in NHS might go through in their day.

“And I’m just thankful & proud. You guys are simply amazing

We citizens are lucky to have you.

Prince Harry angry and upset after Queens aides blocked him from seeing granny to...