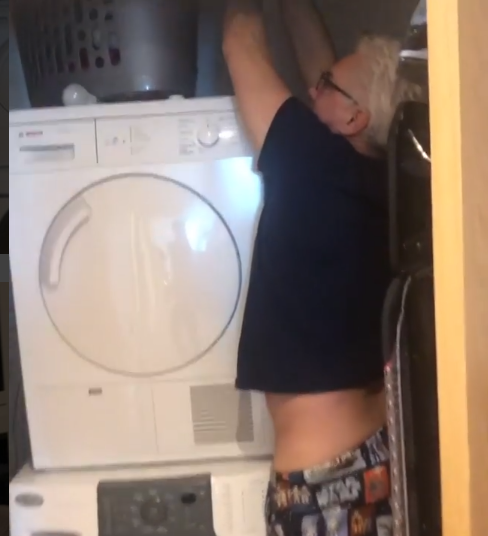 JOHN Barrowman flashed his tush on Instagram after his pal pulled down his trousers – and he was commando.

The Dancing On Ice judge had been changing a light bulb in his laundry cupboard when his pal struck.

He whispered “this is what happens when John fixes the light” before dashing over and yanking down his pyjama bottoms.

The exposed star laughed by carried on with his house work, while fans on Instagram raved over his latest post – and pert bum.

One fan said: “Can you blame him tho?!” as another wanted to know: “Are you doing squats?”

And John captioned his post: “Never fix a breakable glass hanging lamp in you PJs while going commando [email protected] around, look what happens. Jb .”

But fans have seen John is his pants before – after he donned a pair of tiny red Y-fronts in the famous I’m A Celeb jungle shower.

He gaveDIY SOS host Nick Knowles a run for his money, after he became known for throwing on a small pair of Speedos for various tasks.

The broadcaster was often seen having a wash in his swimwear – which clung to his package and left very little to the imagination.

Former Torchwood actor John, decided it was his time to shine and started parading around in his colourful briefs.

John got into his red underwear and teased pal Emily Atack in the shower by pulling her into the freezing cold water.

After squealing and trying to get away, the actress explained: I like to do it at my own pace because it is so cold.

Nick later revealed why he had worn red underpants, admitting his kids were gobsmacked to see their dad in the undies.

He said: “I have to explain this, because that was one of the first things my boys said when I got out. They said ‘Dad, seriously what the hell?’

I made the mistake of taking in white underpants. The trouble is the red shorts and trousers we wear, theyre dyed red by the programme – they are not naturally red. So the first time you get wet it dyes all of your underwear.

“I looked like I was wearing underwear and I had been in a car accident, so I couldn’t wear my underwear anymore.

“The only thing I had was those, and after three days everything was soaking wet so I thought, ‘Oh sod it.’”

Who is Luke Trotman? Love Island contestant and semi-pro footballer