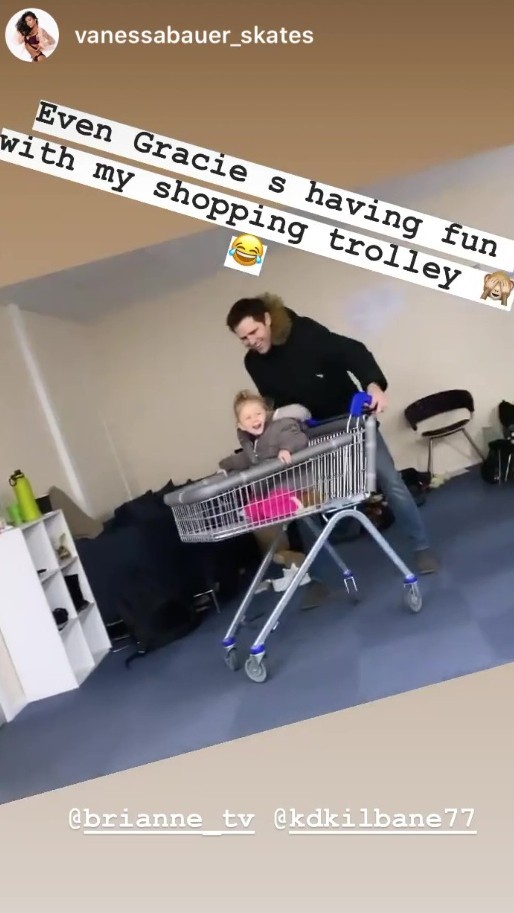 DANCING On Ice’s Kevin Kilbane is loving life as a stepdad to fianc Brianne Declcourt’s daughter Gracie in a new Instagram video.

The retired footballer, 42, got engaged to pro skater Brianne, 39, last week with a shock proposal, and it’s clear her daughter thinks very highly of him.

Skater Vanessa Bauer shared a video of Kevin spinning Gracie around in a trolley she’s using for her routine this week with Perri Kiely.

She wrote: “Even Gracie is having fun in my shopping trolley.”

Brianne could be seen watching on with a smile in the backstage clip.

Earlier this month the mum-of-0ne shared the moment Kevin presented her with a 53,000 ring on Instagram.

Brianne watched with a smile

A huge sparkling ring was then delivered to the table by a waiter before Kevin then belted out a romantic song and dropped to one knee.

Brianne, who could be heard saying “are you serious?”, wasted no time in saying yes.

It was met with a round of applause from diners, and the couple sealed the special moment with a kiss.

Their followers and friends were over the moon, with one writing: “Omg this is so sweet, congratulations you two

Kevin went all out with his choice of ring, with an expert claiming it would retail for 53,000.

Andrew Brown, CEO of WP Diamonds, said: Briannes engagement ring looks to be a 3-carat pear shaped diamond with a diamond halo. Assuming it is a white diamond with a colour clarity of G VS, the ring would retail for around 53,000.

Kevin revealed on Loose Women last week that the pair have got a date in my mind for the wedding.

He said: We have a day, certainly a timescale in our heads so we know what we’re doing.”

They were recently eliminated from Dancing On Ice and shared a steamy snog following their skate off performance, leaving host Holly Willoughby blushing.

The whirlwind romance only began when they partnered up on the show late last year, and they recently moved in together.

The Sun Online exclusively revealed the ITV show stars were dating in December.

The loved-up couple recently spoke out about their living arrangements to Mirror Online in a candid chat in which they discussed their household task sharing.

Kevin said: Im certainly not the boss on the ice. Bri holds me up all the time, she controls it.

The pair have a date in mind for the wedding

Brianne added: He takes more control at home. He cooks the meals, does the laundry. Hes more of the boss.

Home life is completely separate. We do what we have to do on the ice, then we go home and its back to family life.”

The skater has a daughter Gracie, aged three, who is more than happy with the new arrangement.

Kevin and Brianne were eliminated on Sunday

Canadian Brianne partnered with Matt on the show in 2013 but they split amid accusations he cheated on her with two other women.

Kevin won 110 caps for Ireland and played for nine clubs including Everton and Sunderland.

He is single after splitting from wife Laura in 2011.

A source said: There was a real attraction and chemistry between the two of them from the word go.

Hours of training meant it became more than just a professional relationship and now they are fully dating.

“Theyre both single and having a lot of fun together both on the ice and off it.

Kevin was married to Laura for 12 years and they have two daughters.

Kevin was a Republic of Ireland international