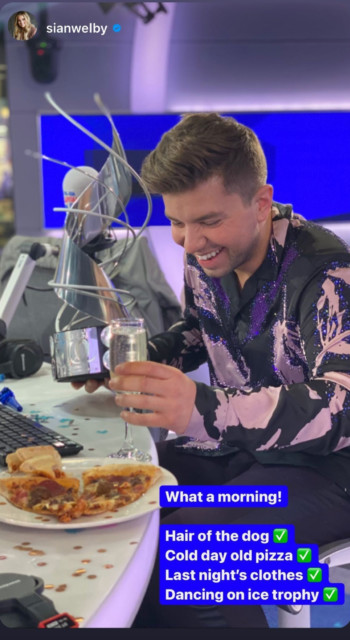 DANCING On Ice champ Sonny Jay celebrated his shock win today with a curry and champagne breakfast as he went into work in his Bolero outfit.

Despite winning the 13th series of the ITV competition, the presenter had to make sure he made it into work for his early shift today.

Sonny works alongside I’m A Celebrity star Roman Kemp and Sian Welby for Capital Breakfast with Roman Kemp which airs on weekdays between 6am to 10am.

The final wrapped up at 8pm, leaving the DJ plenty of time to celebrate yesterday evening.

He took to his Instagram Story at 12.52am to show off his shiny new trophy and an amazing balloon display at home. Sonny had an impressive display waiting for him at home

Around four and a half hours later the star shared a snap of himself in a taxi on the way to work with his trophy.

A tired Sonny captioned the post: “My eyes,” with a laughing face emoji.

He then shared a video of himself in the studio wearing the same shirt from last night’s performance.

The radio presenter captioned the post: “Made it into work. Good start. In my Bolero outfit.” Sonny managed to get into work wearing last night’s clothes His proud co-host Sian also took to her social media platform to share what they were doing this morning to celebrate his exciting moment.

The radio host captioned her Story with a checklist that had ticks next to each point.

She wrote: “What a morning! Hair of the dog, cold day old pizza, last night’s clothes, Dancing On Ice trophy.”

In the snap Sonny can be seen giggling to himself with a glass of bubbly in his hand, his trophy in the other, all whilst looking down at some tasty pizza. An hour later the singer shared a picture of his breakfast choice – a plate of curry and some Bucks Fizz.

After being revealed as the winner of the public vote last night, he said: “That is mental, thank you so much.”

Faye, who finished second, said: “All I wanted to do was get here.

“I did it as a personal challenge and it couldn’t have gone to a better guy.” Sonny, Faye Brookes and Colin Jackson were the final three during yesterday’s final

Colin was eliminated first despite getting two perfect scores on the night.

This year’s series of the show was cut short after injury and illness forced a number of contestants to withdraw.

Emmerdale star Joe-Warren Plant and comedian Rufus Hound both had to leave after testing positive for coronavirus.

Reality favourite Billie Shepherd, TV and stage star Denise Van Outen and actor Jason Donovan had to pull out of the series due to injury.

Last night fans were left scratching their heads when Faye’s dance partner Matt Evers revealed Sonny had won the show 10 minutes BEFORE the winner was revealed on telly.

In the video Matt and Faye seem to shout: “Woo! He’s won!” as Sonny celebrated behind them.

An ITV spokeswoman said: “In this video both couples were celebrating completing their Boleros.

“This was filmed before the winner’s announcement and shows all four cheering together having completed their final routines.”

Who did Prince William date before Kate Middleton?