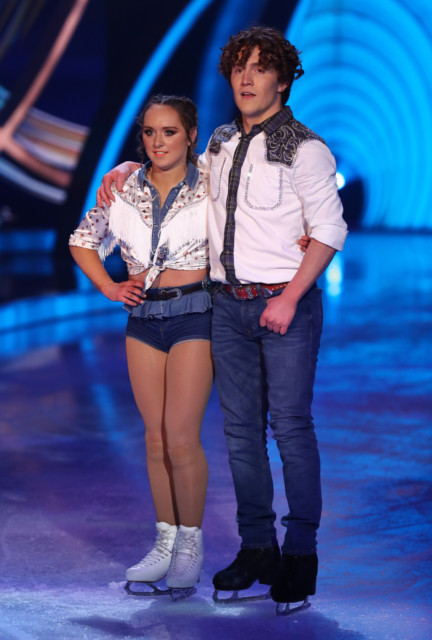 HEARTBROKEN Amy Tinkler has admitted she battled to keep her split from her boyfriend a secret during Dancing On Ice’s Love Week.

Tipped to win Dancing On Ice owing to her Olympic talents, viewers were left surprised when she fell into the bottom two – and all four judges voted to save rapper Lady Leshurr.

But the ex gymnast has now revealed she was in the midst of a painful behind-the-scenes break-up from singer Max Cinnamon leaving her in turmoil just days before last weekend’s Valentine’s-themed show.

Amy, 21, bears no hard feelings over her early exit from Dancing On Ice early, but says it clear the public didn’t get a chance to get to know her as she was forced to turn down interviews with media to avoid probing questions around her love life.

In an exclusive interview following her exit, the star told HOAR: “I was voted out by the public, and that’s the way these shows go.

“But the reason we decided not to do Press was because it was Valentine’s Week, love week, on the show . . . and I had just split with my boyfriend.

“I just knew interviews would ask me about Max and it would be so difficult to talk about that.

“If there were going to be headlines, I didn’t want it to be ‘Amy Tinkler’s split with her boyfriend’, I wanted it to be about the show.

“I just didn’t think it was right on both sides to publicly discuss it, especially that week.”

Her split from singer Max just days before last weekend’s love-themed show meant Amy sensationally became the TENTH celeb to be struck by the rapidly spiralling “curse” of Dancing On Ice. She admitted training for the show, which starts months before it launches every year in January, meant they were spending loads of time apart.

She said: “It’s been hard, but I think we both saw it coming. Because of Covid, I was in a bubble here and I didn’t want to risk it by seeing him.

“It was in the contract that we couldn’t mix with households outside our bubbles so I hadn’t seen him in I don’t know how long.

“We were at different points in our life, which was probably the main reason why we did split up. We wanted very different things out of the relationship. “He’s a lovely guy and I wish him all the best in his music career and stuff, but we just weren’t meant to be.”

“So in that sense, I don’t think Dancing On Ice had too much to do with that.”

The couple regularly posted loved-up photos on Instagram, and in September Amy posted a snap of them kissing, captioning it: “The best six months with you.” Amy faced rapper Lady Leshurr in the skate off

In another shot she added: “I’m so lucky I get to fall in love with you more every day.”

The Geordie had replaced Denise Van Outen after she was forced to quit the hit ITV show with a shoulder injury.

Meanwhile, Dancing On Ice has been forced to push back the competition by a week to account for stars dropping out and will air a ‘best bits’ episode tomorrow night at 6pm instead.

Chris Hughes shows off painful bloody wound inches from his eye after night out...