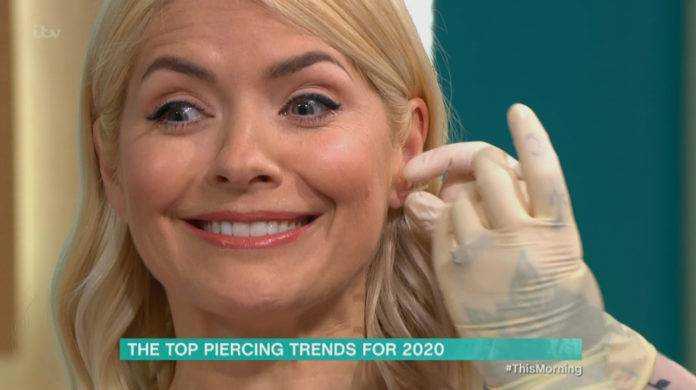 HOLLY Willoughby squealed in pain as she had her ears re-pierced live on This Morning today.

The 39-year-old decided to get them done because her original holes had practically closed over and she struggled to wear earrings.

She revealed the only time she wore them was on Dancing On Ice but it was very painful doing it each time.

So as Samantha Hayler appeared during an item about the trend for people having multiple piercings in their ear – Holly decided to get hers done.

The mum-of-three soon became nervous though as she watched what others had had done.

Phillip meanwhile didn’t help as pretended to be sick as he watched an ear being pierced.

Sitting on the chair, she let out a yelp and admitted it hurt a lot more than she thought it was going to.

But she managed to go through with it and had to pretty triangle studs put in her ears.

Her new piercings come after we revealed that her low-cut dress from last week’s Dancing On Ice had sparked a flurry of complaints.

While she wowed most people in her plunging gown on Sunday evening, broadcasting regulator Ofcom received a series of grievances from unhappy viewers who felt it was inappropriate.

Holly looked incredible in the nude dress with flecks of sparkling gold on it – made by bridal fashion designer Lili Hod.

In fact her look went down so well with the audience that she even got a wolf whistle when she stepped out onto the ice for the first time.

Who is Guggimon and how to unlock Fortnite skin?