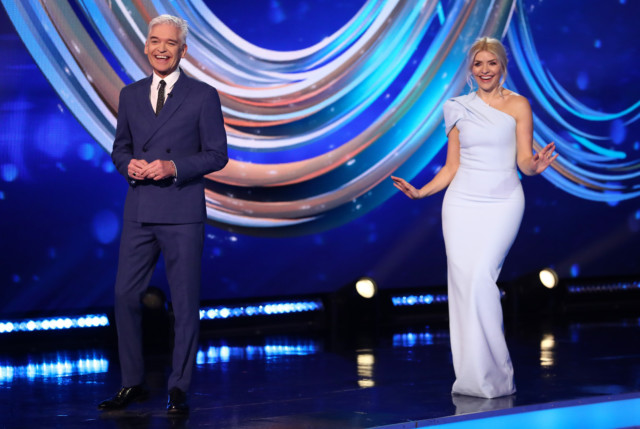 THIS Morning’s Phillip Schofield has raised the prospect of Holly Willoughby skating on Dancing On Ice.

The 58-year-old TV host joked that the pair would have to couple up and take to the ice if there are “any more injuries” on this year’s series.

Phil joked that Holly may have to take to the ice

Revealing the hilarious birthday card Holly was sent by DOI for her 40th birthday yesterday, Phillip took to Instagram to suggest they may have to step in.

He shared a photo of the card, originally posted to the Dancing On Ice Instagram page, which sees a photo-generated Phillip swinging Holly around by the ankles.

In the background, the judges can be seen offering 10s across the board as the skating couple perform the iconic “headbanger” lift.

With this year’s series of the ITV skating show seeing many celebs pulling out with injuries, Phillip joked it was Holly’s time to shine. Holly and Phillip host Dancing On Ice together

“If there are any more injuries, we’ll have to put into practice what we’ve been learning,” Phillip wrote beside the card.

Fans went wild over the “hilarious” image, which DOI said was “the actual card” they handed to Holly as she hosted the show last Sunday.

“Ok but we’re not even joking, this is the ACTUAL card we gave her,” the ITV show’s Instagram page wrote.

While the comment section was filled with laughing-face emojis from followers, Holly wrote: “Best card ever. Thank you.” It comes after Billie Faiers was forced to step back from the competition as she suffered a concussion after falling and hitting her head on the ice.

Just weeks before, Denise Van Outen pulled out of the contest as she fractured and dislocated her shoulder in a nasty fall.

Comedian Rufus Hound was then given no choice but to exit the show when he tested positive for coronavirus and was placed in quarantine.

Holly celebrated her 40th birthday in style yesterday while working on This Morning alongside co-host Phillip. Billie Faiers suffered a concussion after slipping on the ice

She shared an emotional thank you message to him and the This Morning team for making her day feel “special”.

Pictured smiling next to two birthday cakes made by This Morning’s resident cook Juliet Sear, the mother-of-three penned the emotional message.

Taking time to mention “best friend” Phillip, Holly wrote: “So many thank you’s for yesterday, hard to know where to begin.

“Everyone at @thismorning, our amazing producer Ashley and Editor @martinfrizell for making it so so special.

Holly celebrated her 40th birthday yesterday live on This Morning

“[Phillip] for being the best friend and spoiling me rotten. So many memories were made, feel totally blessed and ready to take on this next decade.”

She celebrated on air by drinking champagne, tucking in to her cakes and breaking down in tears during a special message from her teenage crush Paul Young.

Holly started off the day in floods of tears as she was welcomed backstage by a tunnel of balloons.

Co-star Phillip showed off the incredible celebrations including hundreds of balloons and a giant 40th light-up sign.

Holly was speechless as she spotted the This Morning crew lined up along the corridor as they sang Stevie Wonder’s Happy Birthday.

The blonde beauty was overwhelmed by the sweet gesture and began to well up with tears, joking: “I’m going to spend all day in tears.”

Later, to mark the occasion, Holly wore the exact same dress her mum did on her 40th birthday to celebrate the milestone.

She was also surprised by her life-long friends on videolink as she celebrated the milestone birthday, sharing in some of Holly’s most embarrassing moments.

Is Fortnite down? Latest server and status updates

Blow for Strictly’s Tony Adams as he faces dressing down for promoting own clothing...

God of War’s Thor has gamers fuming – as they compare ‘chunky Viking’ to...