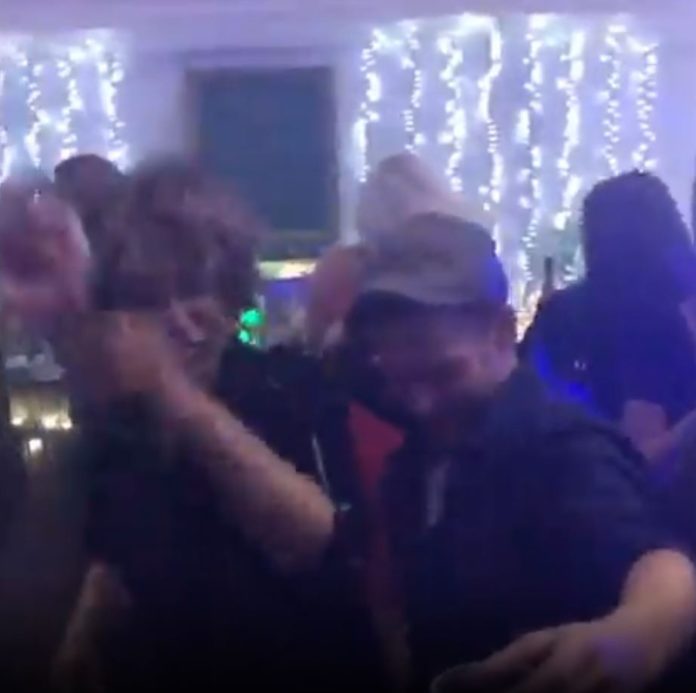 AFTER months of gruelling training and hard work, the Dancing On Ice celebrities let loose as they celebrated the end of the series last night.

In a dramatic finale, Joe Swash was crowned winner just ahead of Perri Kiely and the pair were seen partying the night away.

Fellow contestant Trisha Goddard documented the evening – showing what wild antics they got up to.

Showing she was the life and soul of the party, Trisha was seen dancing alongside all her pals.

Winner Joe was keen to show off his moves off the ice and was spotted grinding up against Trisha.

Newly single Maura looked amazing as she shimmied about on the dance floor, celebrating her success on the show.

Elsewhere Perri was clearly peckish as she was seen carrying a pizza box around with him.

Last night’s result came as quite a shock to some viewers, who had expected Perri to win.

While were thrilled to see dark horse Joe win – after he started off in week one at the bottom of the leaderboard, others were disappointed that Perri lost out after his “outstanding” Boléro and claimed he’d been “robbed”.

One said: “There ya go. I’ve said it many times before…give the British public a vote at your peril. Guaranteed to f*** it up. I like Swashy, lovely lovely fella, but the show is about the BEST dancer on ice. Perri absolutely robbed.”

Another added: “Joe Swash has had no dance background, no idea or practice on how to balance or trick or lift at all. To have his journey was beyond me! Well done, truly deserved! #DancingOnIce.”

Someone else said: “Well that was a surprise! That #bolero was outstanding @perrikiely !!! Quite a shock result #DancingOnIce.”

Announcing the result, host Phillip Schofield said: “You have voted for your champion and it all comes down to this. I can tell you the vote has been incredibly close. The winner of Dancing on Ice 2020 is Joe Swash.”

A stunned Joe looked overwhelmed as he was crowned champion. He said: “Honestly, this has been the most amazing experience and to share it with Alex…”

Quizzing Perri on Joe’s shock win, Phil said: “Everyone thought you had this in the bag.”

Gracious in defeat, the Diversity star replied: “I’ve achieved everything I wanted to. Joe has come so far and I’ve genuinely made a friend for life with Joe, he’s my brother. I love you mate.”

Prince Andrew still cant be quizzed by FBI yet as the proper paperwork hasnt...

Boris Johnson ‘ready for fresh war with judges as he plans to rip up...