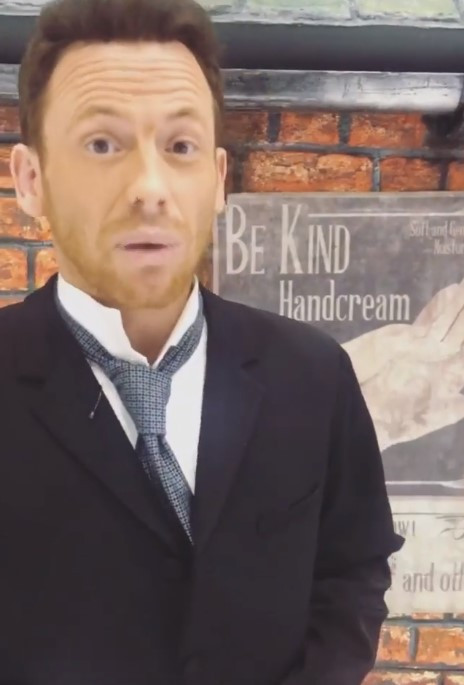 JOE Swash has revealed his hidden tribute to Caroline Flack in his Dancing on Ice finale performance.

The grieving 38-year-old asked for the words “Be Kind” to be written onto a prop for his showdance.

The 40-year-old had shared a message on Instagram in December that read: “In a world where you can be anything, be kind.”

Caroline’s close friend Joe today said: “I asked if they could put the words be king on a poster. Obviously we lost Caroline and we want to try and spread the word for everyone to be kinder.”

The Sun Online revealed this week that grief-stricken Joe “almost broke his Dancing on Ice partner’s back” in a horror fall after hearing Caroline had taken her own life.

He made a risky error as he struggled to concentrate just hours after learning Caroline had taken her own life.

Frightened professional Alex Murphy was lucky not to be seriously injured after Joe landed on top of her when an ice trick went badly wrong.

Joe told us: “When we had found out about Caroline we had to go to work the next day.

“It was a really messed up day and my mind wasn’t on it.

“I dropped Alex really badly on her face and I nearly broke her back.

“That day was a total blur.”

Alex added: “It was really bad. It was the worst fall of my career, I’ll never forget it.

“We were very emotional, we cried a lot that day.”

Joe bravely went on to perform in the live show a day after Caroline’s death.

He admitted: “I couldn’t work out if I was doing the right thing by going through with the performance.

“I thought maybe I should have stepped down, but I’m glad I went ahead. I think I had to.”

Joe grew close to Caroline when they were both presenters on I’m A Celeb’s spin-off show between 2009 and 2010.

He fought back tears as he paid tribute to her on the ITV show that night.

Ben Foden slammed The X Factor as terrible TV and said it was on...