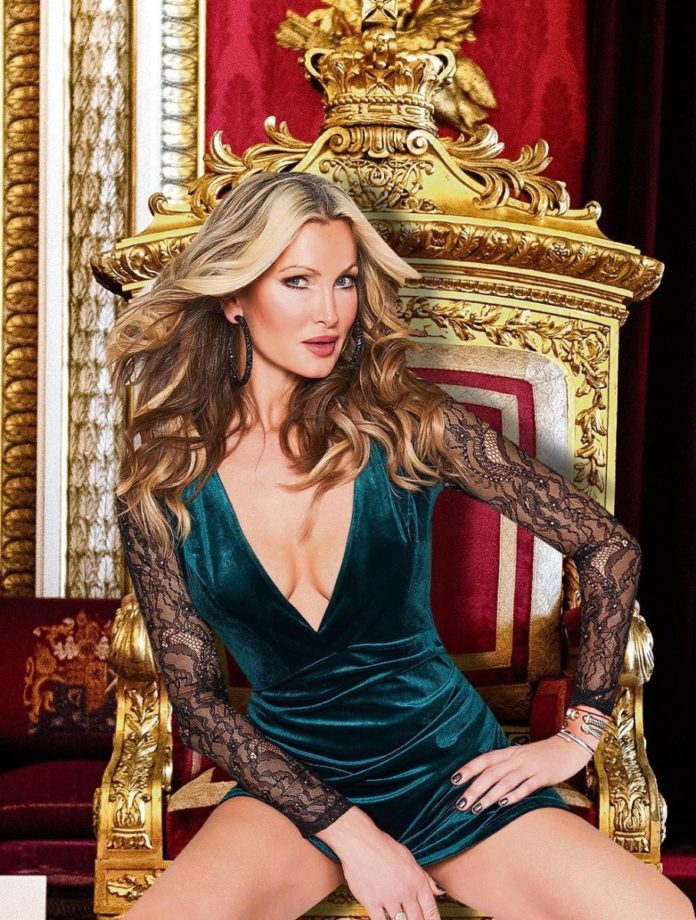 PRINCE Andrew let Dancing On Ice star Caprice sit on the Queen’s throne during a date at Buckingham Palace, The Sun on Sunday can reveal.

In an extraordinary suspension of protocol, he wined and dined the American model at the Palace — and even let her “steal” a decorative bowl.

During a two-month friendship, Caprice, 48, also introduced the under-fire Prince to an American masseuse, who he secretly went on to date for ten years.

A source close to Caprice said: “She did think it a bit strange that he wanted to hang out as, from her side, there was no chance of a snog — she didn’t fancy him.

“But as an American, she was thoroughly entertained at the notion he was a part of the Royal Family.

“Plus all the secretive ­rendezvous, although unnecessary, were a great family dinner conversation point.

“He took her to Buckingham Palace twice, and on one occasion she sat on the Queen’s throne.

“She spotted a bowl she liked and asked Andrew if she could steal it and post it to her mum. He graciously let her, and her mum loved it!”

Andrew, 60, went on a series of dates with Rod Stewart’s ex for two months in 2000 — less than a year before he is alleged to have slept with 17-year-old Virginia Roberts.

Caprice met the Duke at a pal’s dinner party in the country after being seated at the same table. They were friends for two months, regularly speaking on the phone and going on platonic dates.

As well as several dinners — including once at the Michelin-starred Lanesborough hotel in ­central London — they went to the cinema to see a Star Wars film.

A friend added: “She was annoyed because they missed the first ten minutes to allow his ­security team to clear the way, and make sure the back row was empty so they could sit there without anyone seeing.”

One time at Buckingham Palace, an unknown man and woman joined the couple for a ­champagne-fuelled supper.

The Throne Room contains the official “Chair of the estate of the Queen”, the coronation chairs of King George VI and Queen Mary and Queen Victoria’s crimson and gold state throne.

While the Royal Family are allowed to host visitors, it is understood they are expected to first notify the Palace guards.

A royal source said: “I’ve never heard of anything like this before. Andrew has an apartment at the Palace, and clearly feels at home there.

“He’s entertained friends within his own space, but showing pals around the entire Palace is quite extraordinary.

“It’s a particularly strange thing to do, especially given that the Queen could walk around the ­corner at any given moment!”

Seven years ago armed police pointed their guns at Andrew and ordered him to “put his hands up and get on the ground” after mistaking him for an intruder in the Buckingham Palace gardens. Scotland Yard later apologised.

During their friendship, Andrew also told Caprice that Prince Harry, then a schoolboy of 16, was jealous as he also fancied her.

A friend added: “He told her that his nephew, Prince Harry, was very intrigued by their friendship.

“Apparently Harry had Caprice’s calendar on his bedroom wall at Eton, and Harry was grilling Andrew over Christmas pudding at Sandringham about his crush.”

The pair were friends for two months, regularly speaking on the phone and going on platonic dates before she dumped him

Caprice 48, “dumped” Andrew when rumours of their friendship began to surface — but not before she had set him up with her ­masseuse, Denise Martell.

“He’d been nothing but a gentleman, but quite simply she didn’t fancy him and ran for the hills when a newspaper article came out linking them — he wasn’t her type and she found him quite dry.

“Also, by that time, she had set him up with her energy healer, Denise. Andrew had asked her for a great masseuse recommendation after flying to Los Angeles and saying he felt stiff and achey.

“Denise only took on female ­clients but made an exception for Andrew. After insisting on an initial meeting, she began treating him — and then they started dating.

“She even flew to the UK to stay with him at his country house where they invited Caprice over for dinner.

“It was just the three of them, and Caprice said they were very cute together, and quite tactile.”

Andrew faces ongoing allegations that he coerced 17-year-old Virginia Roberts into having sex after she was flown to London by late serial paedophile Jeffrey Epstein.

Andrew categorically denies he had any sexual contact or relationship with the now 36-year-old.

In November the father of two told BBC’s Newsnight that it “couldn’t have happened” because he was at home the night in ­question in 2001, after taking his daughter Beatrice to Woking’s Pizza Express.

But last weekend a former royal protection officer questioned his alibi, claiming he may not have been at home. The officer said Andrew may have returned to Buckingham Palace in the early hours of March 11.

He recalled the Prince arriving by car at the Palace and allegedly shouting at guards when the gates were not opened quickly enough.

Agents want to talk to Andrew about Epstein, who killed himself last year in jail while awaiting trial for sex ­trafficking charges

The anonymous former Met employee believes it could have been the same evening the Duke is accused of having sex with ­Virginia Roberts at the home of his friend, Ghislaine Maxwell.

These latest claims — provided in a signed affidavit — are also likely to be investigated by the FBI.

Agents want to talk to the Duke about Epstein, a prolific sex offender who abused Virginia and killed himself last year in jail while awaiting trial for sex ­trafficking charges.

Inside the lavish Davos hotel with panoramic mountain views and private spa suites as...

Liz Truss is the next PM – what is she promising Britain?

The Queen is looking for a new cook and youll get to live in...