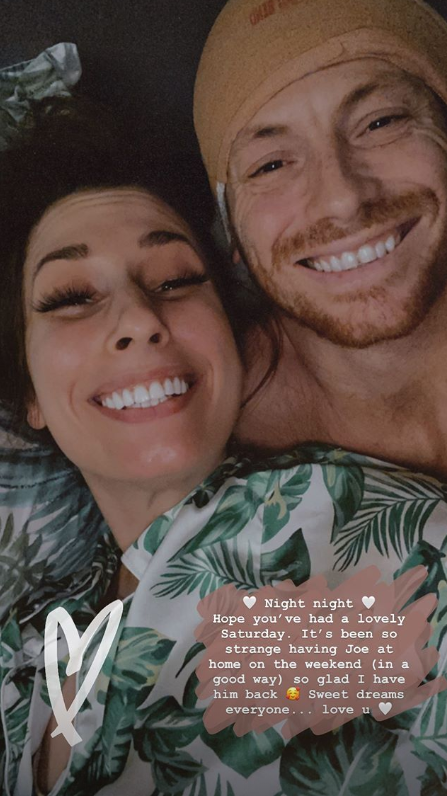 STACEY Solomon said it’s ‘weird’ having Joe Swash at home all weekend after his Dancing on Ice win.

Over the last few months Joe, 38, has been training hard and performing each week for the popular ITV show – but yesterday he finally got to spend some well earned quality time with his girlfriend, 30, and their son Rex for the first time since Christmas.

For the past three months, the Dancing on Ice champion has been pretty much non stop with his busy schedule – but now that the competition is finally over he can relax with his loved ones.

The pair enjoyed a cute family day out yesterday and Stacey documented the whole thing on her social media.

After their busy day, Stacey shared an adorable snap of the two cuddled up together in bed with the caption: “Night night. Hope you’ve had a lovely Saturday.

“It’s been so strange having Joe at home on the weekend (in a good way) so glad I had him back. Sweet dreams everyone… love u.”

Despite being confined to his bed with a poorly ear earlier this week, the mum-of-three managed to get him out of the house to enjoy their first Saturday together in months.

The two went out for a bite to eat and day-time stroll with their 10-month-old son Rex.

Sharing a boomerang of him pushing their son Rex in his pram, She wrote: “Got hoe out, we are going to for a walk while it’s not raining and get some lunch.”

Once at their chosen lunch spot, Stacey filmed Rex in his high chair before panning to Joe – who had his head all bandaged up – and said: “What a treat, we haven’t seen you on a weekend in months.”

Later, the couple got a further treat when Rex fell asleep, allowing them to enjoy a cup of tea on the sofa.

Stacey said quietly so as not to disturb the sleeping tot: “Feels like we’ve won the nap timing lottery. Happy Saturday everyone.”

Their outing comes a day after Stacey updated fans on Joe’s health.

She said: “Loads of you asking where Hoe is today… he’s ear is really playing him up so he’s in bed resting (sic).

“But I’m quite please because now he won’t find out that I caved, gotta find somewhere to hide it until Easter (sic),” she added, referring to all the Easter goodies she purchased today.

Joe beat Diversity’s Perri Kiely to the Dancing on Ice title on last Sunday, which came as a shock to some viewers.

She gushed about her beau on Twitter writing: “Firstly, EVERYONE in the final tonight was AMAZING & deserved that trophy. Secondly, Joe we‘re all so immensely proud of u.

“To anyone who voted, thank u from the bottom of our hearts. He put his heart & soul into DOI & has LOVED every minute. It meant the world to him. So thank u.”

Harry & Meghan Markle ‘Netflix deal banned them from controlling anti-royal shows like The...

EastEnders spoilers: Whitney Dean in danger as Gray Atkins discovers she is with Kush...

Love Island villa put in quarantine after crew is struck down by violent vomiting...