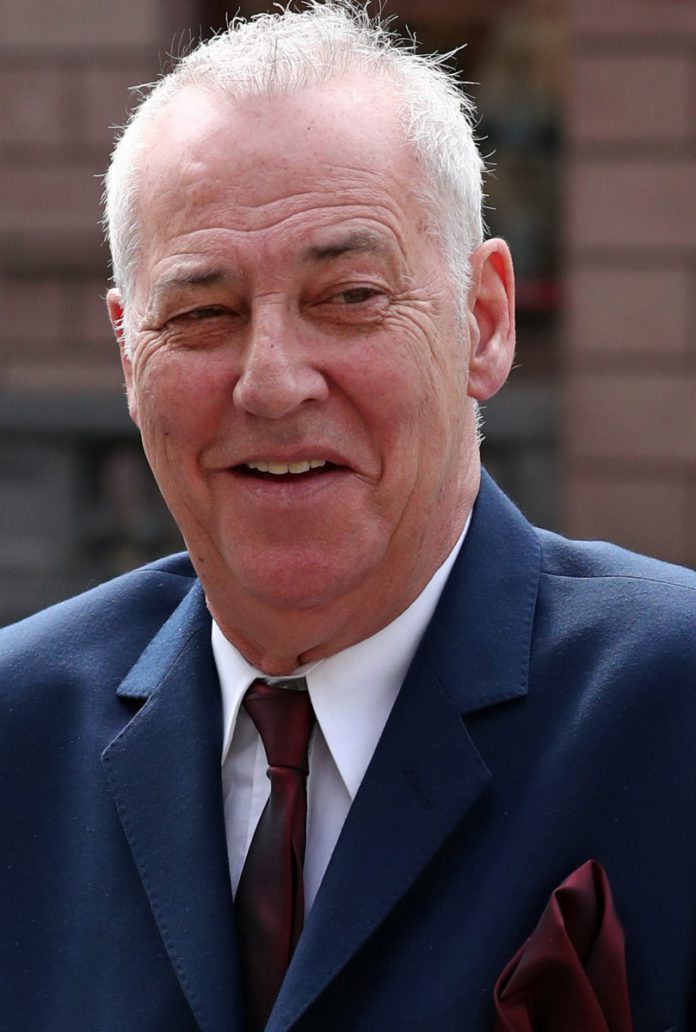 FORMER Strike It Lucky host Michael Barrymore – one of Britain’s favourite entertainers – is back in the media spotlight over a two-decades-long murder case.

The English comedian was hoping to make a comeback to TV while appearing on Dancing On Ice, but recently quit the show.

Who is Michael Barrymore?

One of Britain’s favourite entertainers, he appeared on Saturday night TV, building a unique relationship with the audience.

How did Michael become famous?

The TV star was best known as the presenter of game show Strike It Lucky at the peak of his career.

Barrymore was known for his quips with the contestants and his exuberant personality.

The comedian landed his own sketch show, The Michael Barrymore Show, in 1983, but after just one series he decided to walk out of his contract.

Michael presented BBC game show Get Set Go! in 1983 while also making a number of appearances in multiple Royal Variety Performances, the first one also being in 1983.

The BBC cancelled the game series shortly after its first run, which led Michael to find a new home with TV programme Barrymore from 1991 until 2000.

Michael also helmed Michael Barrymore’s Saturday Night Out between 1988 and 1989, making him one of the most popular television personalities in the UK.

He also took part in Celebrity Big Brother in 2006, where he was runner up to Chantelle Houghton.

What happened to Stuart Lubbock at his pool?

The Strike It Lucky frontman was axed by ITV after the tragic death of Stuart Lubbock in the swimming pool of the star’s Essex home.

A post-mortem found he had suffered severe internal injuries that suggested he was sexually assaulted.

Lubbock, a dad-of-two from Harlow, and others had been enjoying an all-night party at the star’s then mansion in Roydon, Essex.

Barrymore had invited the meat factory supervisor back to his home for a private party after meeting him at the Millennium Nightclub.

Seven people, including Lubbock, joinedBarrymore at his five-bedroom home.

A 20,000 reward has this week been put up for information, ahead of a Channel 4 documentary, Barrymore: The Body In The Pool, being aired on Thursday, February 6.

Senior Investigating Officer DCI Stephen Jennings, leading the Essex Police investigation, said he took part in the programme “to find out the truth about what happened to Stuart and bring someone to justice for his rape and murder”.

Why did Michael quit Dancing on Ice?

On December 18, 2019, it was revealed that Michael was forced to pull out of Dancing On Ice due to a broken hand.

The injury happened when he fell in training, shattering a bone in his hand.

A source said: “It’s a real shame for Michael as he was hoping this would be his big comeback, but after his injury there is no way he could continue.”

The funnyman has now been replaced by Radzi Chinyanganya.

The 32-year-old is best known for presenting Blue Peter from 2013 until 2019, and hosting ITV show Cannonball.

He was also part of the presenting team for BBC’s coverage of the Winter Olympics 2018.

It’s not clear what the presenter’s net worth, but NetWorthPost claimed last year that he was worth an estimated $15million.

However, other websites say his net worth is currently “under review”.

Who was Michael’s wife Cheryl?

Cheryl and Michael divorced in 1997, after becoming estranged, with Michael coming out as gay in 1995.

After this her health began to deteriorate. In 2003, she suffered a burst ulcer.

More than five million EU citizens apply to REMAIN in Britain despite us leaving...