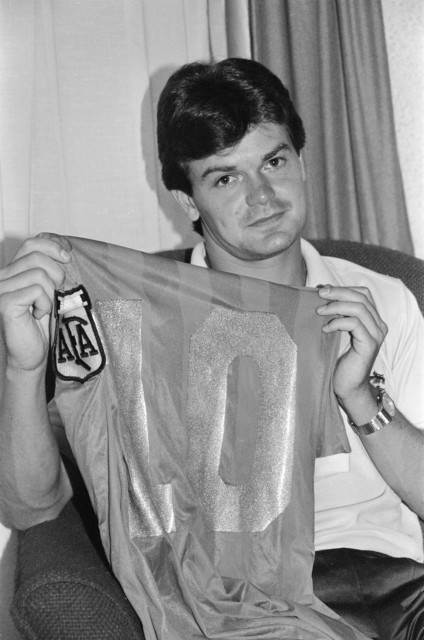 ENGLAND’S dressing room was raging after Diego Maradona had knocked them out of the World Cup in Mexico.

The air was blue and the FA officials were being told to go to Fifa and demand a replay because of Maradona’s 1986 ‘Hand of God’ goal.

It was not just the Argentinian cheat who was the subject of their ire,  though.

So too was Steve Hodge who had swapped shirts with Maradona  after the match.

Hodge, the ex-Nottingham Forest midfielder, still has the shirt, which  is believed could now be worth more than £500,000.

But, having sliced his clearance in the build-up to Maradona’s handball goal, the act he also had hold of that No 10 shirt in the dressing room was too much for his team-mates.

“It was an angry place to be because we felt we’d been cheated, could  have got to the final and maybe won it.

“People like Ray Wilkins — who was one of the nicest men you could meet —  was going berserk at the FA  people, saying we should get the game replayed.

“Some of us had a go at Steve Hodge asking why he wanted Maradona’s shirt when he was a cheat.

“But I’ve since heard what it’s worth and now we all wish we’d got it!”

Hodge was rooming with Peter Reid and took the shirt out of his bag when they got back to the team hotel.

Reid had been left trailing in Maradona’s wake as he chased him in vain on the way to his amazing solo  second goal.

Former Everton and Manchester City star Reid said: “When we were in the hotel, he got the shirt out with the  No 10 on it and says, ‘What about that then?’

“So not only has Maradona  battered me and handled one in, I’ve got Hodge showing me his shirt.

“Suffice to say, I wasn’t best pleased and I gave Hodgy the biggest b******ing he’s ever had in his life.

“But they say it’s worth a few quid so maybe he had the last laugh.”  Hodge, who called his autobiography ‘The Man with Maradona’s Shirt’, said: “After the game I just thought ‘that’s the end of it’ and decided I’d try  and get Maradona’s shirt.

“I saw him coming and tug on my shirt and he took his off  and swapped with me. It was as simple as that and over in ten seconds.  I’ve no  idea if he kept my shirt or not.

“I have no hatred towards him. I blame the linesman for not spotting the handball.”

The Maradona shirt has been on display in the  National Football Museum  to mixed reactions from England supporters.

But Argentina fans have made pilgrimages to see it on trips to this country.

Hodge added: “Would I ever sell it? I’m not sure really, I quite like it.”

Recalling the quarter-final match in Mexico City, England star Reid said: “We opted not to man-mark him — thank God I wasn’t given that job.

“Belgium tried it in the semi-final with Eric Gerets, who was a great player, and he still tore them apart. He was one of those players, whatever way you went about, if he was playing well on the day he was very, very difficult to stop.

“We felt a bit cheated with the first —  but the second goal was magnificent.

“They were dancing in the tunnel, it really went off,  and I think Terry Butcher steamed into them. It was quite lively afterwards.

“But, quite simply,  Maradona is one of the best  players to walk the planet.

“Being an Englishman we’ve got some regrets about the handball but he was a great, great footballer.”

EastEnders spoilers: Ben Mitchell confronts rapist Lewis as he struggles to cope with the...

Give your home a pop of pink with these cheap and cheerful High Street...

Queen’s ‘favourite grandkid is Louise – not Will or Harry’ – as she offers...

Royal Mail more than doubles Christmas temp jobs to 33,000 this year to help...