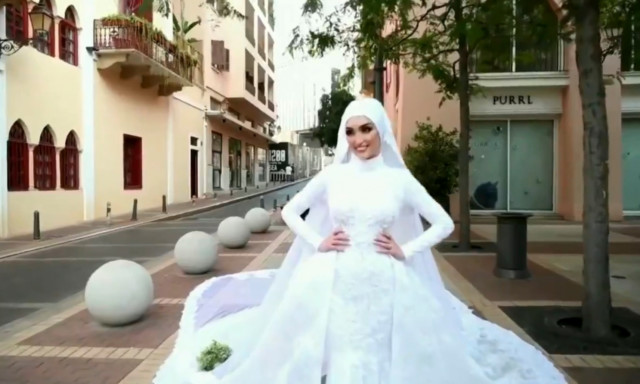 HORRIFYING footage shows the moment a bride runs for her life during the devastating explosion in Beirut yesterday.

Newlywed Israa Seblani, 29, is seen draped in a shining white gown and smiling for the camera before a thunderous blast rings out just one kilometre away in the Lebanese capital.

Footage shows newlywed Israa Seblani, 29, draped in a shining white gown and smiling for the camera before the blast She then runs for cover after hearing the explosion Bride Seblani, a doctor working in the US, helped to check on the injured nearby, before fleeing central Beirut’s Saifi square to safety 135 people have been killed and around 5,000 injured in the blast – caused by the explosion of 2,750 tons of ammonium nitrate.

In the clip, shared today on Twitter, the bride is seen beaming as her photographer Mahmoud Nakib zooms in on her wedding dress.

But seconds later, a gigantic explosion is heard in the distance – with the force of the blast picked up by the microphone.

The camera then pans away to a quiet residential street where clouds of dust from the explosion have already created a thick smog.

Residents of nearby apartments are then seen hurrying across the street as the bride makes a dash for shelter.

Lebanese prime minister Hassan Diab has said that the ammonium nitrate had been sitting unsecured for six years in a warehouse in the city’s port.

The disaster was sparked when a welder ignited 2,700 tons of explosive chemicals in the port area, it’s reported.

Bride Seblani, a doctor working in the US, helped to check on the injured nearby, before fleeing central Beirut’s Saifi square to safety.

Returning to the scene a day after the explosion, she told Reuters: “”I have been preparing for my big day for two weeks and I was so happy like all other girls, ‘I am getting married’. My parents are going to be happy seeing me in a white dress, I will be looking like a princess. The mammoth explosion erupted in the port yesterday People walk with their belongings after evacuating their damaged housing units in the Mar Mikhael area of Beirut, Lebanon Rescuers in the smouldering remains of the blast site

The blast, which occurred at around 6pm yesterday, has obliterated Lebanon’s capital as authorities continue to search the rubble for victims.

But several of Beirut’s hospitals were damaged in the blast, hampering their efforts to treat the constant stream of wounded victims.

Outside the stricken St George University Hospital, people with various injuries arrived in ambulances, in cars and on foot.

Dozens of injured were being treated on the spot in the street outside, on stretchers and wheelchairs.

Experts believe the explosion was the equivalent of 1,000 to 1,500 tonnes of TNT, which is about a tenth of the intensity of the Hiroshima nuclear bomb.

The blast has proved particularly devastating for a country already suffering the twin crises of a failing economy and a severe coronavirus outbreak – though countries around the world have pledged financial aid.

Foreign secretary Dominic Raab said today that Britain would provide £5 million of aid to Beirut, and promised the UK would “stand by the Lebanese people in their time of need”.

And the US Secretary of State Mike Pompeo also reiterated his country’s “steadfast” commitment to helping the Middle Eastern nation.

France, meanwhile, says it is sending two planes with dozens of emergency workers, a mobile medical unit and 15 tonnes of aid. People check inside a car crushed by rubble Aerial images show the scale of the destruction this morning