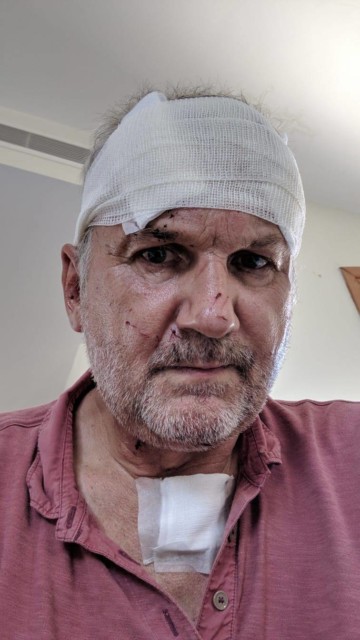 A BRIT wounded in the Beirut mega blast feared he had been blinded by flying debris — until he realised his eyes were filled with his blood.

Andy Kemp, 58, was at his second-floor office desk when the mammoth explosion of chemicals half a mile away fired glass shards into his head and neck.

Andy Kemp was wounded in the Beirut blast He feared he had been blinded by flying debris

An initial explosion, believed to have been sparked by a welder, triggered a second massive blast in a store of 2,750 tons of volatile ammonium nitrate at the city’s port.

The eruption and shock wave — a fifth of the size of the atom bomb which levelled Hiroshima — felled entire office and apartment blocks and tossed cars into the air like toys.

Andy said yesterday he staggered into the street to find a “hell on Earth” littered with the dead and dying under a vast mushroom cloud.

The dad of three, who runs an environmental firm based in the Lebanese capital, told HOAR: “I was at my desk when the first big explosion went off and presumed it was terror.

“I had managed to type the words ‘uh-oh’ into my phone to warn my family when the second blast completely destroyed my office and flung me across the room.

“I’d never experienced such noise and destruction and must have blacked out for a moment but when I came to I couldn’t see and thought I’d been blinded.

“But I couldn’t see because the blood from my head wounds had filled my eyes — I was soaked from head to foot.

“When I wiped it away, I realised my office was upside down and I was losing a lot of blood. I needed to get to hospital fast.

“Helpers came but when they got me out into the street it really was like hell on Earth. ‘ONE OF THE LUCKY ONES’

“People killed by the percussion wave from the blast were sitting dead in their smashed cars and there was glass and debris everywhere. There were too many to count.

“My office was next to a hospital which had been badly hit and people were running out rather than into it to get help.”

An ambulance got him to another hospital. He went on: “I was one of the lucky ones.

“People were dead or dying and very seriously wounded and the place was overwhelmed. I’ve lived in Beirut for 20 years and experienced explosions before but this was completely off the scale.”

Andy, whose apartment close to his office was completely wrecked, added: “One shard narrowly missed my jugular vein — a few millimetres and I would be among the dead.”

Older son Jack, 19, was at home but escaped with cuts to his shin.

Foreign Office officials said staff were injured in the British Embassy three miles from the explosion and some needed hospital treatment.

Its shaken employees were last night urgently trying to reach Britons living near the blast zone amid fears the death toll will rocket.

English teacher Phillipa Mishlawi, 68, an expat from Torquay, said she thought it was an earthquake when her apartment block at least a mile away “shook as though it was about to fall down”.

The gran added: “I’ve seen a lot of suffering in Beirut since moving here in 1976 but nothing like this. It’s like an apocalypse.”

Claire Malleson, 45, from Dorset was jogging round the American University campus where she works when she was hit by the blast.

She said: “We were warned about possible toxic fumes. The blood banks are calling for urgent donations.”

Many of the dead were reported to have been hurled into the sea from the port silos which blew up.

Horrific images also circulated of victims torn apart inside cars as they commuted past the blast site during rush hour.

The explosion, heard more than 140 miles away in Cyprus, carved out a 200-yard crater which filled with seawater.

Port food stocks and a grain silo were smashed, adding to hunger fears for thousands of homeless victims.

Rescuers were racing against time to save scores of victims trapped inside collapsed buildings.

One man was hauled alive from rubble 16 hours after the blast.

Meanwhile, a nurse was hailed a hero after she carried three newborns to safety from a hospital rocked by the shock wave. At least 135 people died in the blast

Four other nurses there were killed and 200 patients wounded.

Security sources said a welder at a port building was repairing a hole when a blaze broke out and quickly spread to the warehouse storing the ammonium nitrate.

The fertiliser was last night said to have been shipped there in 2014 by a Russian businessman who went bankrupt and abandoned it.

Officials insisted the explosion was not deliberate and blamed negligence.

A customs boss claimed his office had sent six warnings that the huge stash of powder keg chemicals could “blow up Beirut”.

US Pentagon sources also called it a tragic accident — but President Donald Trump claimed his security advisers “seem to think it was an attack, a bomb of some kind”. Amanda Holden reveals she likes to trampoline naked and encourages fans to ‘strip off...

Love Island Nass best friend slams show for de-sexualising him and calling him a...

Will Love Island return this summer? Coronavirus could affect the new series