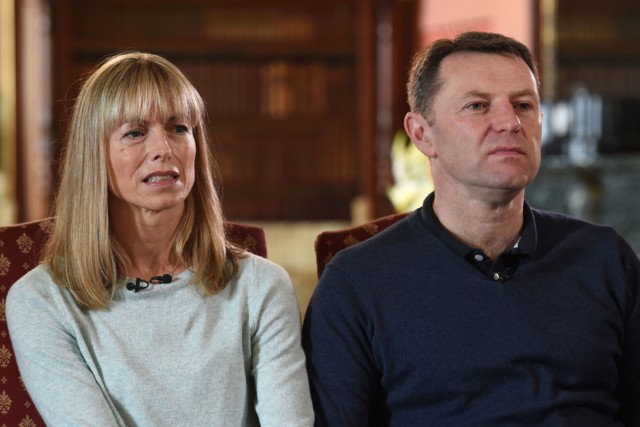 MADELEINE McCann’s parents refuse to believe their daughter is dead until her body is found – despite German cops claiming she “cannot be alive.“

Kate and Gerry have been left exasperated by prosecutors saying their daughter is a murder victim and they are investigating a key suspect but do not have enough evidence to charge him.

A family source has now said: “Until a body is found and it is proved to be Madeleine’s, Kate and Gerry are not giving up hope.

“These latest ‘she’s dead but there’s no body’ theories have been repeated over the past three-and-a-half months but in all this time there appears to be no significant new development.

“It leaves Kate and Gerry on tenterhooks and in a state of limbo not knowing if there will be a breakthrough or if German officers sadly may have got wrong. It’s been another desperately difficult time for them.”

The McCann pal added: ‘They want answers more than anyone but while the Met Police are still treating Madeleine’s disappearance as a missing people’s inquiry… it gives the family hope she could still be alive.

“Nothing has changed for them. They will continuing hoping until they know for sure.”

Chief investigator Hans Christian Wolters said this week that “everything points to her being dead.” Investigators previously said they had ‘concrete evidence’ Madeleine was dead His team of prosectors are convinced convicted paedophile, German national Christian B, is responsible for the Brit toddler’s disappearance.

However, he admits there still was no “smoking gun” evidence to bring any charges.

Three-year-old Madeleine vanished from a holiday apartment in Portugal’s Praia da Luz in May 2007.

She had been left sleeping alone with her younger twin siblings while her parents were dining in a nearby tapas restaurant with pals.

A month after the 13th anniversary of her kidnap British and German cops sensationally revealed they had a new suspect and appealed for witnesses to come forward.

Heart doctor Gerry and ex GP turned medical worker Kate, of Rothley, Leics, declined to be interviewed but said in a statement in June: “We would like to thank the police forces involved for their continued efforts in the search for Madeleine.

“All we have ever wanted is to find her, uncover the truth and bring those responsible to justice. “We will never give up hope of finding Madeleine alive but whatever the outcome may be, we need to know as we need to find peace.

“We would like to thank the general public for their ongoing support and encourage anyone who has information directly related to the appeal to contact the police.”

In a fresh media interview Hans Wolters told Portuguese state broadcaster RTP: “The result of our investigation does not point in any way to the possibility the suspect might have kept Madeleine alive.

“We have nothing to indicate she could be alive. Everything we have points to her being dead. We have no margin of manoeuvre.”

In a 13th anniversary post Kate and Gerry penned: “The investigation to find Madeleine remains open and continues, even though, in a way different to the ideal.

“We remain grateful for the ongoing efforts and commitment from all those involved in the search to find her and we hope and pray, as always, that our efforts will be fruitful.

“We will never give up hope of finding Madeleine alive, but whatever the outcome may be, we need to know as we need to find peace.”

In a recent post on the Find Maddie Campaign page, the digital co-ordinator, stated: “Never stop believing in hope because miracles happen every day.”

The friend, who remains anonymous, added: “I know it’s been a while since I posted. Just wanted to thank everyone who continue to keep Madeleine and her family in your hearts.

“We still believe in miracles and hope you do too. We are grateful for your love and support.”

How old is Prince William and what is the age gap between him and...