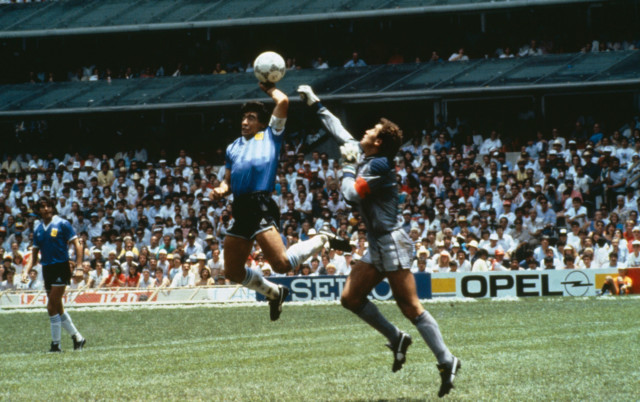 Former keeper Shilton was beaten by Maradona’s Hand of God goal, which knocked England out of the 1986 World Cup after a heart-breaking 2-1 defeat in Mexico City.

In an interview earlier this year the 125-capped Shilton said: “The whole England team suffered because he cheated.

“He didn’t out-jump me, he punched the ball in with his hand.

“People moan about VAR these days but it would have been brilliant for us in that instance.

“He admitted to it, saying it was the Hand of God, but he didn’t apologise or show any remorse.

“His attitude explains why there’s animosity.

“We’ve been offered a number of times to put it to bed. But he won’t apologise, and I won’t shake hands with him or acknowledge him.

“He’s the greatest player in history but I don’t respect him as a sportsman and I never will.”

Maradona finally offered an apology of sorts in an exclusive Sun interview 22 years on from that World Cup quarter-final.

In 2008 he told Sun man Tom Wells: “If I could apologise and go back and change history I would do.

“But the goal is still a goal, Argentina became world champions and I was the best player in the world.

“I can’t change history. All I can do is move on.”

Maradona passed away on Wednesday after suffering a heart attack, aged 60.

Tributes have poured in from the likes of Pele, Lionel Messi, Cristiano Ronaldo and David Beckham.

The last image believed to have been taken of Maradona shows him smiling in his hospital bed.

And his last words before he died were: “I don’t feel well.”

Former aide to Priti Patel ‘given £25,000 after taking overdose due to bullying’

Amanda Holden reveals she walks around the house naked – but her daughters beg...

I’m a Meghan Markle lookalike and trolls have used me as a punchbag since...