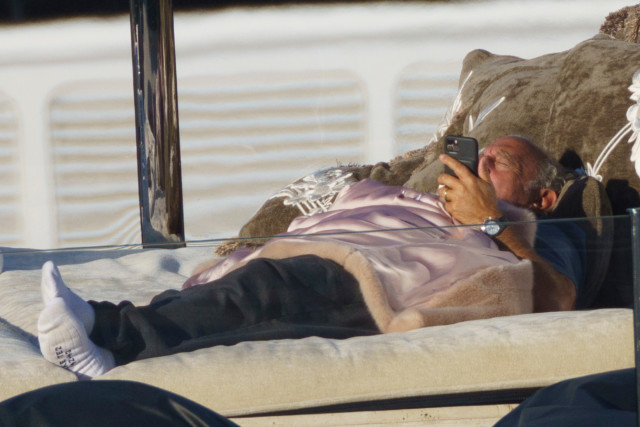 But because Arcadia collapsed on Monday night, HMRC lost out on VAT, national insurance and income tax.

There is no suggestion the timing was to avoid the HMRC payments.

And it comes as pensions experts estimated a black hole in Arcadia’s pension fund of up to £350million.

The shortfall could see around 10,000 pensioners having retirement pay-outs cut by ten per cent.

Tonight sources said the firm’s vast workforce meant payroll taxes alone were likely to be “significant”. And Green’s biographer, Oliver Shah, tweeted the total would run into “tens of millions of pounds”.

Lady Tina, pictured with Sir Philip Green, is the legal owner of Arcadia

Even if Arcadia had gone bust after the new law came into force, Green, 68, and his wife, Lady Tina, would not have personally lost out.

They still would have had priority over HMRC to get back at least some of the loans they put into the business.

Under a company voluntary agreement struck last year, Lady Tina — who is the legal owner of Arcadia — lent the group £50million. She also provided £40million in compensation to landlords and put in another £10million of extra equity.

Crown preference was abolished in 2003 but has been brought back by the Government as a way of securing Treasury cash from failed firms.

Pension regulators have come under pressure to disclose whether all the cash promised by Lady Green has yet been paid to the scheme. Burton and Dorothy Perkins are also part of the Arcadia group Jobs at Wallis stores are among 13,000 at risk across the group While she is understood to have paid over £50million, she has a ten-month breathing space before she legally has to pay the full amount.

Experts today said there was little chance of Sir Philip or his family being hit with any legal action.

Pensions consultant John Ralfe said: “Whatever political pressure there is, whatever else might happen, there is no legal case.”

Michelle Keegan looks incredible in a bikini on the beach on luxury holiday in...

Harry used beach video to show ‘escape’ from Royalty while Cambridges are ‘noisy &...