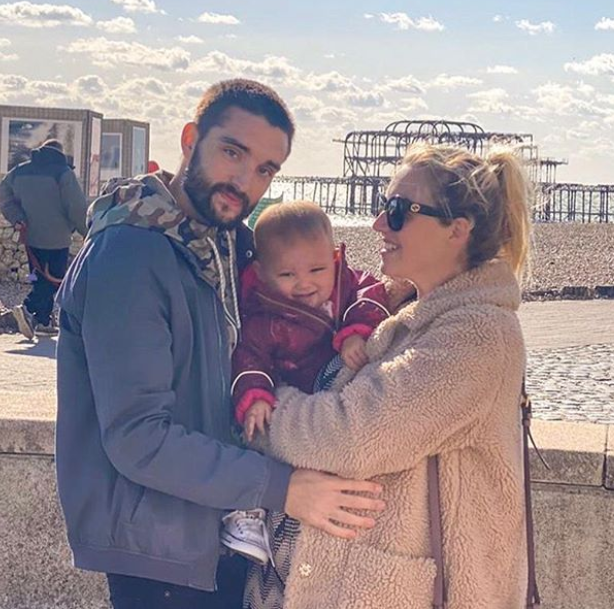 THE Wanted’s Tom Parker has been diagnosed with an inoperable brain tumour.

The devastated singer, 32, who is a father to a 15-month-old daughter and has another baby on the way, has stage 4 glioblastoma.

Tom Parker has been diagnosed with an inoperable brain tumour

In an interview with OK! Magazine, the emotional star said: “I’m still in complete shock, it’s so much to take in.”

The star is being supported by his Wanted bandmates including Max George and Jay McGuinness, who today told him: “We love you.”

Tom’s wife Kelsey, who is 36 weeks pregnant, said: “It has been a crazy six weeks. We had an inkling that something was wrong in July, but we never could have imagined it was this.”

Tom said the diagnosis didn’t feel real and added: “I knew something wasn’t right, but I never expected it to be this. You never think this will happen to you.” Tom, left, was a member of pop group The Wanted

The average life expectancy for his illness ranges from between three months to 18 months from the time of diagnosis.

Tom decided not to ask for a prognosis and insists he will beat the illness to have a future with his children. He said: “I’m going to be here, I’m going to fight this.”

The star suffered a seizure in July and took himself to A&E where he was put on a waiting list for an MRI scan.

Six weeks later he had another more serious seizure during a family trip to Norwich and was rushed to hospital. The singer and wife Kelsey are expecting their second child

Kelsey was not allowed to be by his side because of coronavirus rules, and Tom was alone when he was told he had stage 4 glioblastoma.

It begins in the brain and is often quick to spread. The aggressive cancer is difficult to treat and is resistant to treatment, as the cells within the tumour are not all of the same type.

This morning Tom posted a heartbreaking message on Instagram, telling fans he had already begun his six weeks of chemotherapy and radiotherapy treatment. Tom’s fans sent him and his family their love The post read: “Hey guys, you know that we’ve both been quiet on social media for a few weeks and it’s time to tell you why.

“There’s no easy way to say this but I’ve sadly been diagnosed with a Brain Tumour and I’m already undergoing treatment.

“We decided, after a lot of thought, that rather than hiding away and trying to keep it a secret, we would do one interview where we could lay out all the details and let everyone know the facts in our own way.

“We are all absolutely devastated but we are gonna fight this all the way. We don’t want your sadness, we just want love and positivity and together we will raise awareness of this terrible disease and look for all available treatment options. It sparked an influx of supportive messages from upset fans. One wrote: “oh my god i’m sending all the love i can

Another shared: “sending so much love to you and your family.

.” A third commented: “Sending love & positivity to you

Tom’s long course of treatment, including chemo and radiotherapy, means Kelsey will be giving birth to their second child while he is in and out of hospital. Tom with bandmate Jay McGuinness, who was an usher at his wedding The 32-year-old took part in ITV’s cancer fundraiser The Real Full Monty in 2018.

And Arg has said: “We love you Tom! We got this brother, No doubt about it!”

Tom’s daughter Aurelia was born 15 months ago, and he and Kelsey announced baby number two was on the way back in May. The singer revealed his shocking news in an interview with OK! magazine

The couple got engaged in 2016 and married in July 2018 in a romantic ceremony in the grounds of Ridge Farm in Surrey, England, surrounded by their family and closest friends.

The Wanted’s Max George and Jay McGuinness were his ushers. Tom and Kelsey said his bandmates have been incredibly supportive since being made aware of his illness.

The Wanted shot to fame in 2010 when their first single All Time Low topped the charts.

They went on to have nine more Top 10s including a another number one in 2011 with Glad You Came.

It launched their careers in the tricky US market, hitting number three on the Billboard charts.

However, after finding immediate stardom, album sales cooled off by the time of their third release Word Of Mouth in 2013.

Not even a much hyped E! reality series – produced by Ryan Seacrest and with a Lindsay Lohan cameo appearance – could turn their fortunes around.

They went on hiatus in 2014 to focus on solo projects.

Did you miss our previous article…
https://www.hellofaread.com/featured/madeleine-mccann-suspect-christian-b-boasts-he-wont-fall-for-dirty-tricks-cops-using-to-get-him-to-confess/

Meghan said ‘you don’t need to be a princess, you can create your own...