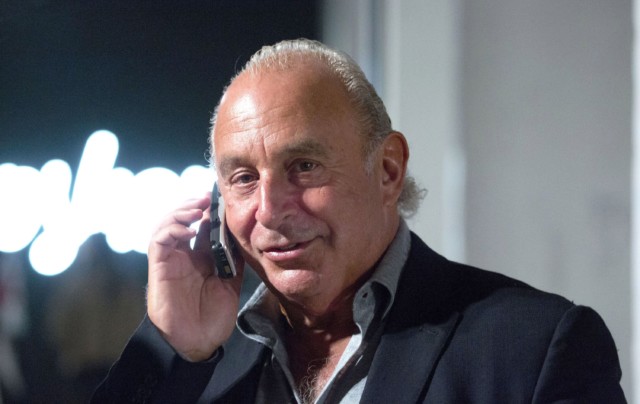 SIR Philip Green has refused to apologise as thousands of the workers in his high street empire face the sack.

Employees have blasted the Topshop tycoon as “selfish” after his Arcadia Group collapsed into administration last November.

Sir Philip Green has refused to apologise as thousands of the workers in his high street empire face the sack (File photo)
The retail mogul was pictured in Monaco last year, and spent time with his family there last Christmas as Arcadia faced collapse

Some 12,000 jobs could be lost as a result of the collapse of Sir Philip’s retail empire, which came after sales were decimated by the coronavirus pandemic.

Earlier this week, Boohoo announced it had purchased Dorothy Perkins, Burton and Wallis from the Arcadia group in a deal that would see 214 shops closed forever.

They are the last remaining Arcadia Group assets to be sold off after ASOS purchased Topshop, Topman, Miss Selfridge and leisurewear brand HIIT in a deal worth £330million last week.

However, Boohoo’s takeover does not include physical stores – meaning 2,450 shop staff are at risk of redundancy.

Asked by the Daily Mirror whether he had a message for his workers, he replied: “I’m not getting involved in this conversation, you know that.”

Arcadia staff told the paper that the collapse of Sir Philip’s empire had left them devastated emotionally and financially – with some said to be unsure as to when they would receive redundancy money.

Beatrice McGeary, a former TopShop store manager in Craigavon, Northern Ireland, told of the moment she was forced to tell her employees that the store was closing.

She said: “I was so stressed and emotional – even now, thinking about it. It’s people’s lives.”

Beatrice, 52, said she had no pay rise for ten years, and criticised Sir Philip for being “selfish”.

She added: “Why was he so selfish?

“He took all that money out of the company and didn’t invest in it.” Lucy Otter, a sales assistant, said the closure of the Topshop and Topman store where she worked in Lincoln was a “massive blow”.

The mum-of-three told the Mirror: “I loved this job. I’ve got the best of friends I made there.

“It was like going round your friends’ home but you were working.

“Now we can’t even go and see each other. We feel isolated.”

Though she did not have an Arcadia pension, she called on Sir Philip to do “the right thing” and make good any shortfall in the fund.

The Boohoo takeover comes just two weeks after bought the Debenhams website and brand for £55million.

This deal also didn’t include physical shops either, meaning the remaining 118 Debenhams sites are expected to shut, putting 12,000 jobs at risk.

At the time of falling into administration in November, Arcadia Group, which was purchased by Sir Philip for £850million in 2002, owned 444 stores in the UK and 22 shops internationally.

Following the collapse of his empire, Sir Philip was pictured spending time on his yacht with his family in Monaco.

When is the Queen’s Commonwealth Day address to the nation?

Britain to table full text for a free trade deal with the EU next...