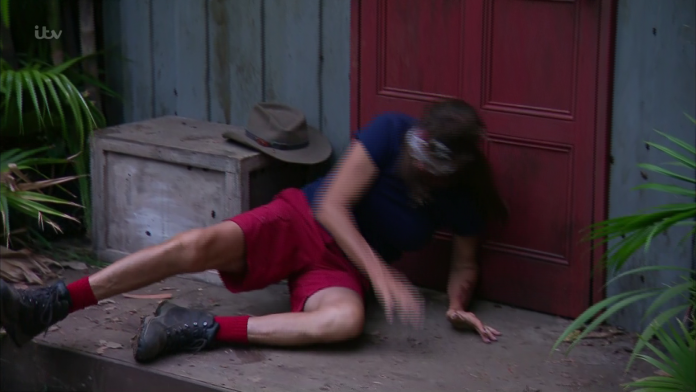 CAITLYN Jenner had I’m A Celebrity viewers in hysterics tonight as she fell out of a window during tonight’s episode.

The Olympic champion, 70, was taking part in a dingo dollars challenge with James Haskell when she tried to climb out of a hut through the open window only to lose her grip and plunge to the floor.

When viewers realised Caitlyn hadn’t injured herself, they became hysterical with laughter.

One wrote: “Caitlyn Jenner falling out a window was something I never knew I needed #imaceleb”

A second said: “Caitlyn Jenner falling out of the Jail window has to be the series highlight so far

Another added: “Funniest thing of #imaceleb so far? Caitlyn Jenner falling out of a window… on rewind.”

In the second challenge of the episode, James and Caitlyn had to solve an escape room-style challenge inside an abandoned bank.

They eventually managed to open a cage containing dingo dollars which they used to purchase the freedom of Cliff Parisi, leaving Andy Whyment in the Jungle Jail.

Meanwhile Jacqueline Jossa and Myles Stephenson were faced with choosing whether to use their six stars to feed the Jungle Jail or the rest of the campsite.

They settled the dilemma with a game of rock, paper, scissors and kept the food for themselves.

Roman Kemp had to reveal their decision to the other celebrities.

Reading from a letter, he said: “Earlier Jacqueline chose Myles to join her in today’s trial, the Snake Hotel, where they won six stars. They were then told they must join the outlaws in the jail house.

Police want even MORE lockdown powers – including bans on long journeys and outdoor...

Love Island’s Yewande Biala hits out at Lucie Donlan again saying ‘she got my...