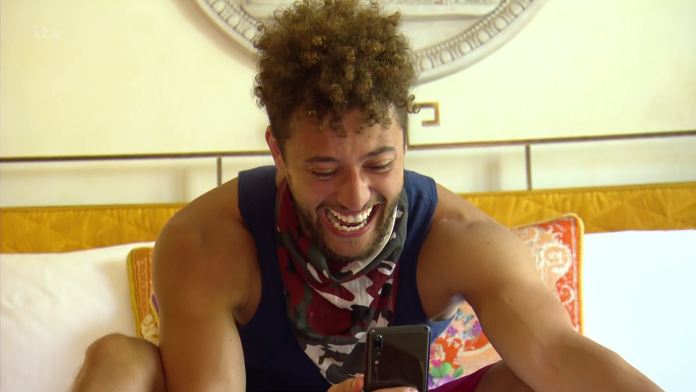 The Rak-Su frontman was catching up with his bandmates on tonight’s Coming Out show when they asked him if he had a better chance with the reality star now he’s pals with her dad.

And Myles revealed: “Caitlyn was like, ‘I can’t guarantee anything but when you come to LA, I’ll get Kendall round, we’ll cook dinner and get some wine.’”

He was over the moon but it was a more heartfelt time for Caitlyn as she broke down in tears on the phone to her daughter.

The reality star broke down in tears when her daughter Kendall FaceTimed her after leaving I’m A Celebrity.

In a sneak peek from tonight’s Coming Out show, the emotional moment was caught on camera as the famous family finally made contact.

Caitlyn’s family faced a backlash for not meeting the 70-year-old when she left the jungle – or sending her a message from home.

After four weeks without speaking, the model appeared on a video call wearing a dressing gown and asked her dad how the experience was, adding: “Well, I’m excited to see you.”

Caitlyn admitted it had been “hard” in the jungle saying: “I haven’t been on my phone in a month.”

Caitlyn got emotional as she reflected on her time on the show, saying: “I was very lucky. I thought Why the hell am I doing this?

“But the people in the camp were so great, we had so much fun. It made it a lot easier.

Caitlyn just missed the final after she was voted off in a shock double elimination with Nadine Coyle – but had no family members to meet her on the bridge.

Instead her fellow campmate James Haskell was there to accompany her back to the hotel.

Back in her room, Caitlyn was in for a surprise as her partner Sophia was waiting for her.

The pair embraced in a hug and Sophia commented on how skinny Caitlyn was.

Caitlyn laughed and said: Im down to a size six, you would be jealous!

Following her video call with Kendall, Caitlyn said she desperately needed a shower after three weeks in the jungle, but popped open a bottle of bubbly first.

Sophie toasts to Caitlyns return to civilisation and the pair have a long overdue catch up.

Fans were left fuming during the show when Caitlyn was snubbed by her famous family and only received a care package from her DOGS.

The campers were all given packages that included letters and gifts from family back home, but the reality TV star’s letter was very short and only included a picture of her pooches.

“Love you, stay strong – you’re killing it,” read Caitlyn’s I’m A Celebrity campmate Myles Stephenson, “everyone at home is rooting for you especially these two cuties.”

“From my dogs!” laughed Caitlyn, looking pleased to see her pets.

Kim Kardashian later hit back by claiming no one from I’m A Celebrity reached out to the family.